Whether we’ve loved or hated the decisions Nintendo have made this console generation, I think we’ve all been surprised by the Wii’s level of success. Nintendo went into the current console race arguing that great gameplay was more important than (graphical) processing power. The Wii may have never gotten the kind of third-party support that Microsoft and Sony’s consoles still enjoy, but, Nintendo’s in-house development team have proven that they can make fantastic, visually impressive games on the Wii’s limited hardware which can stand shoulder to shoulder with the greats from either the Xbox 360 or the PS3’s library of titles. The Legend of Zelda: Skyward Sword is the ultimate proof of this. 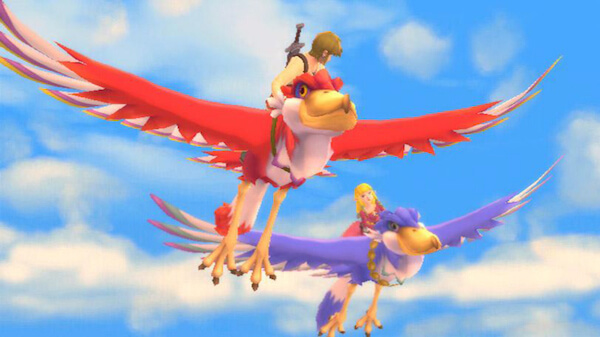 Skyward Sword’s set-up is exactly what you’d expect from the series by now. Once again you the player are in control of Link, who starts his adventure in a peaceful village much like that in almost every other Zelda game. The twist here is that this village happens to be floating high in the sky above the clouds, where everyone is ignorant of the vast land of Hyrule below them. All they do is ride massive birds all day, and smash other people’s pots… or was that last part just me?

The first thing you will notice is how beautiful this game is; the character models remind me most of Twilight Princess, but swapping out that game’s pseudo-realistic look for something closer to Wind Waker’s cel-shaded style. Every frame is bursting with bright primary colours that remind you of the great 2D animated features studios like Disney used to make. All the architecture and character designs have been crafted with the same love and detail that is to be expected from Nintendo’s in-house art team by now.

The soundtrack is equally as masterful. This game’s rendition of “Great Fairy Fountain” had me sitting on the main menu screen for a few minutes, just so I could soak it in. There is another section early in the game where Zelda sings accompanied by her harp that I found quite touching. The music remains consistently strong throughout, and is possibly my favourite score of all the Zelda games I’ve played. 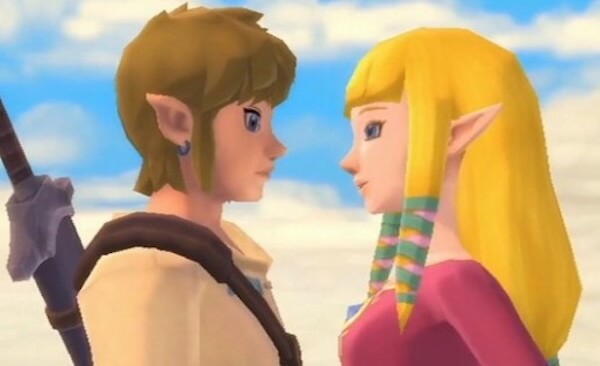 While the greatness of the presentation is immediately apparent, the game takes a while to show you anything more than that.  As has been noted by many, the introduction to this game is rather slow. Now I can understand why this might get on certain people’s nerves, but personally I really liked it. Why you ask? Simple, the answer is Zelda. Skyward Sword uses the time spent in its lengthy tutorial to establish Zelda as a character, and develop her and Link’s relationship. Yes, Nintendo could have been more economical with their use of your time, however the pleasing result is that when Zelda finally does go missing and it’s time to rescue her, you really want to save her. I’ll be honest, caring about Zelda as a character was never my motivation to progress in previous titles.

While we’re on that subject, the characters and overall plot are really quite charming. It’s a simple tale, and the motivations of the characters aren’t complex yet you’ll still get wrapped up in the adventure that unfolds, and it might even tug at your heart strings. I mentioned Zelda above, but she is the soul of this game. She’s optimistic, adventurous and sweet. She can also be quite bossy when she needs to be, as I’m sure poor old Groose will tell you. Another stand out is Ghirahim, who serves as the main antagonist. This guy is… well… creepy. He’s not especially intimidating in the same way Ganondorf is. He just moves and emotes in a way that gets under your skin and makes you feel uncomfortable.

I do have a couple of issues with one character, Fi. She’s the spirit who lives inside the master sword, and guides you on your journey. First of all, the gibberish language she speaks in gets annoying very quickly. Secondly, she treats you like a small child. I pick up a key. Fi says “A key, you can use that to unlock stuff” (may be paraphrasing). My response “OH MY GOD! I KNOW WHAT KEYS DO!” The number of times she pops up to state the bleeding obvious is beyond count.

What many will be concerned about with this game are the Motion Plus controls. Well, they work really well… about 90% of the time. Let’s talk about that rather annoying 10%, shall we? Swimming – motion control swimming. Whose idea was that, especially seeing as Twilight Princess wisely avoided implementing it? Sure, when you’re flying your Loftwing the Wii remote is utilised to change the direction and height of your glide in a similar way to the swimming controls, however flying never gets irritating for one simple reason; you’re always in huge open spaces and most of the time you’re just holding the remote steady while you gently glide to your next objective. Whenever you’re swimming though, you’re almost always navigating tight spaces. The motion controls just don’t have the precision to handle that kind of movement and it becomes very frustrating. Luckily you’re never required to do anything too complex underwater, and these sections make up a very small part of the overall game.

The other implementations of motion control more than make up for this shortcoming. First of all, the sword combat is simply sublime. Waggling will not be tolerated and will be punished. In fact, there is an encounter very early in the game that teaches you this the hard way. If you mindlessly wave your remote at this particular enemy, he will grab your sword and throw it to the other end of the room, leaving you helpless. You quickly learn that patience and observation are key. Wait for the enemy to give you an opening and then deliver a precise strike. Each of the enemies is fun to engage in combat and they vary enough that you’re not using the same tactics every time.

A lot of Link’s gadgets use motion control effectively as well. Highlights for me include the bow and arrow, which is precise and responsive. I cannot believe that using an analogue stick to aim would have produced the same speed and accuracy that the Wii remote did. Also your trusty flying beetle, an effective tool for solving a number of puzzles but also acts as a scout scanning the environment for obstacles and opportunities.

The structure of the game seems to have taken inspiration from another famous Nintendo series, Metroid. The sky acts as a hub world where you use your Loftwing to navigate from place to place. Then there are three areas where you can leap off your Loftwing and descend below the clouds. Rather than being open spaces which simply link temples/dungeons together as with previous Zelda games, these areas have complex puzzles and challenges in order to progress. Where the Metroid influence comes in is that there are story relevant areas and temples you can’t access on your first visit, because you require certain gadgets to progress. At first when you realise you’ll be revisiting the same three areas over and over, it’s a bit disheartening. But when you return, you’re almost never exploring the same sections you have been before.

The temples are this game’s highlight. Sure, you get your forest temple and your fire temple, which seasoned Zelda players will be familiar with, but later on there are some really inventive approaches to both level and puzzle design within these structures. One example is an area that revolves around the idea of shifting time. In the present the temple is old and decaying whereas in the past it was vibrant, colourful and full of futuristic machines and automatons. Using magic crystals you can shift a small section of the temple backwards in time, giving you access to tools and mechanisms that are no longer there in the present. This mechanic manages to be both aesthetically impressive while creating some very interesting gameplay scenarios.  And of course, each temple ends with a puzzle-like boss battle each of which is highly enjoyable if not particularly challenging.

The Legend of Zelda: Skyward Sword is the best game Nintendo have delivered on the Wii and shows exactly (with the exception of the swimming) how motion controls should be implemented. That said, the additions to this game aren’t to the degree where I can claim that Skyward Sword has dramatically changed the Zelda formula, but it delivers a level of execution that is hard not to be impressed by. Skyward Sword may not be the most important game in the series, but it is one of the finest.