Leon gets to grips with DICE’s abandoned ‘Eurostyle’ run and gunner, which has emerged blinking into the light after more than 25 years

I’ll admit that the legend of Ultracore had pretty much passed me by until its recent reemergence.

Legend synopsis: DICE – when they were better known as the people behind the Pinball Dreams/Fantasies/Illusions trilogy rather than the Battlefield folks – were making a side-scrolling run and gun game called Hardcore for Psygnosis back in 1994, before the project was canned very late in the day.

A quarter of a century later, German publisher Strictly Limited picked the game, had the final 1% of development polished off and renamed it for release on the Mega Sg and, subsequently, PS4, Switch and our old friend the PS Vita. 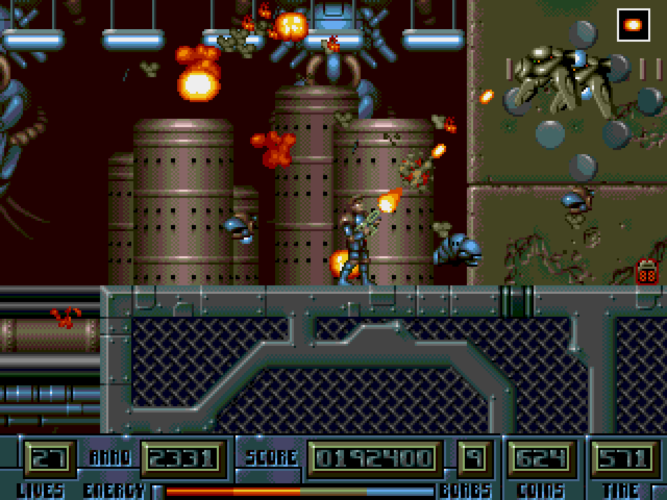 The piece itself, true to its Scandi roots, is very much a ‘Euro’ style game; It has the unmistakable look and feel of a 16-bit title developed outside of Japan, with its grainy pixels, muted palette, stiff animation and interrupt-laden FM chip tunes (also available here in a more lavish ‘CD’ arrangement).

That distinctly European flavour is also highly detectable in the slightly suboptimal locomotion and level design – I fear the perfectly timed pixel-perfect jumps required from around halfway through will deter many of those accustomed to more player-friendly modern titles.

That said, I have played three of the game’s five stages and had a fine time with them. There are signs that DICE were looking to learn from its Japanese peers in the ways of level design; these are not the repetitive sprawling labyrinths of many European games of the era, but fairly tight and logically laid out lairs. Logically that is in videogame level terms, not as realistic facilities, I should add.

I found the moment-to-moment running and gunning of the swarming robot hordes is surprisingly tight and satisfying. While your mechanoid assailants don’t have a great deal of character or distinct AI, they are at least clearable – no infinitely respawning nasties here, mercifully – at least not in the first three-fifths of the game. 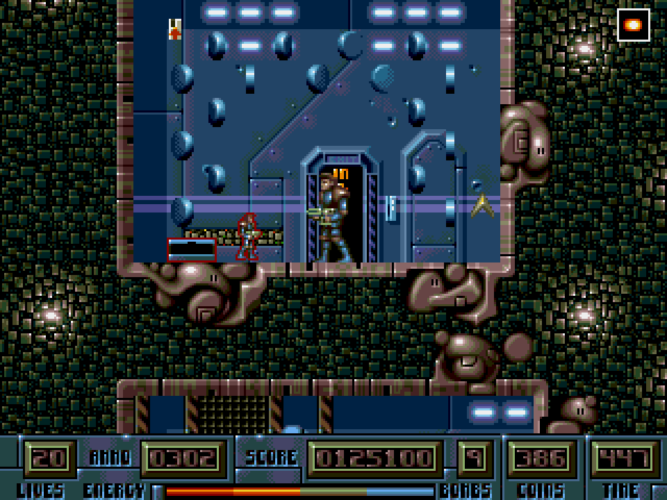 Contemporary niceties extend to allowing the player to use the right analogue stick to aim and shoot, however – mystifyingly – these concessions do not extend to any sort of save system beyond a passcode for each level.

Authenticity is appreciated on one level, and the whole package evokes in me a nostalgia for the time that the game was originally intended to come out – which is remarkable for a game that I don’t think I knew existed until recently.

Again however, when players have so much choice these days, even the barrier of having to input a 16 digit key to continue their game each time they load will undoubtedly prove a hurdle too high for some.

I think it’s great that Ultracore has seen the light of day on some of today’s most popular consoles. Despite some maddening sequences of sudden deaths, the game keeps me wanting to progress with its reasonably generous checkpointing and extra lives quota – as well as some of those extremely noddable tunes.

Noting Ultracore’s title and lineage, I was anticipating something so brutal and infuriating that I might considered it to be all but ‘unplayable’ in the modern era, yet I have not found that to be the case.

I’m more than happy to keep this gritty 90s throwback installed alongside the likes of Gunlord X and Xeno Crisis in my treasured ‘blasts from the past’ folder.

Leon played the game on PS4 (Pro) using a code supplied by the game’s PR.

For fans of the physical, Strictly Limited have Ultracore listed for PS4 and Switch: https://www.strictlylimitedgames.com/releases-2/ultracore/