Beer and Love and Robots: My time in VA-11 HALL-A.

“The usual,” the gruff news editor tells me as he grabs a seat at my bar. I’m not sure he’s been here enough times for there to really be a ‘usual’, but I do remember what he ordered on his last visit, so I mix up a big beer – it’s not quite the same when I need to mix five different chemicals together rather than just crack open a can, but it’ll do. If he’s happy enough (or drunk enough), maybe I can get a good story out of him before one of my android regulars shows up.

Just another night in VA-11 HALL-A. 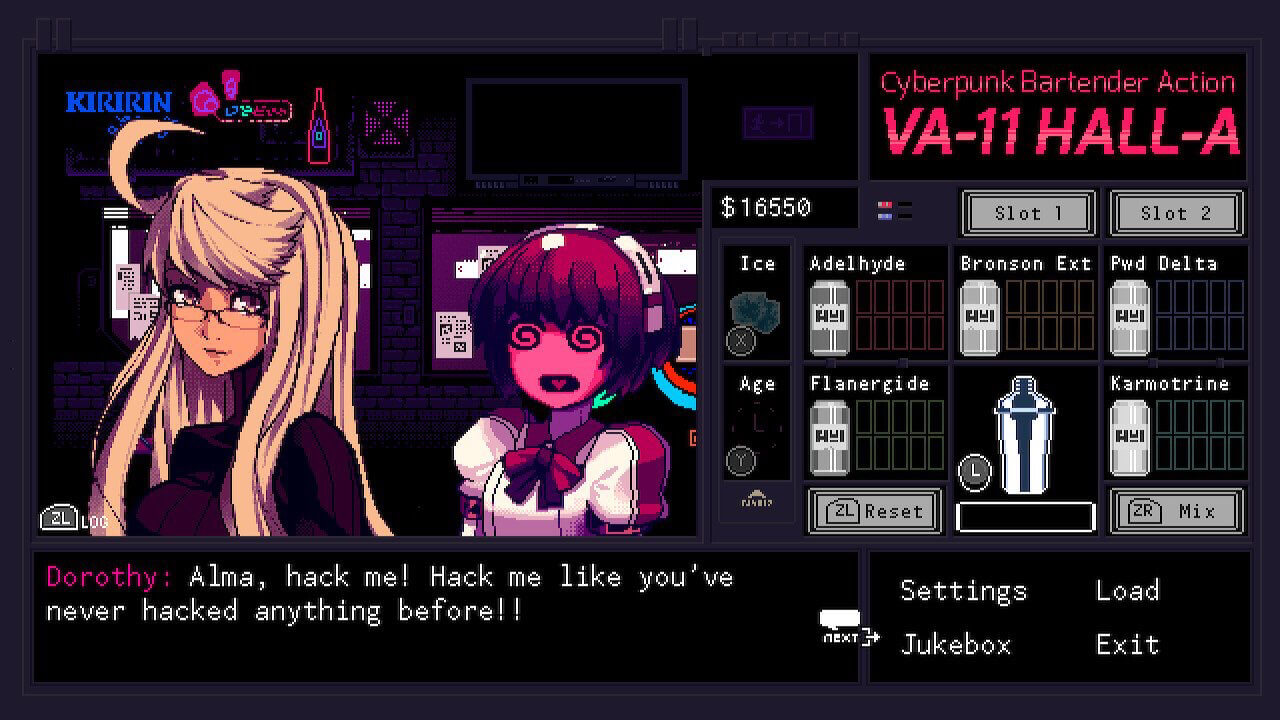 VA-11 HALL-A: Cyberpunk Bartender Action, released originally in 2016 by developer Sukeban Games and now Switch and PS4 ports in 2019, presents itself pretty much exactly as you’d expect from the title.

You play as Jill, one of the bartenders at the titular establishment, and your time is divided between two main locations: your company-sponsored apartment, where you can browse various apps on your phone and talk to your cat, and VA-11 HALL-A, the bar where you work and interact with the rest of the cast.

Aside from a few side events which throw some fun variety into your story, most of Jill’s days are mechanically the same; she browses a few blogs and news sites, maybe does a little online shopping, and then heads for work, where she stocks the jukebox with a fresh set of tunes and opens for business.

The wrapper for the story involves consistently making enough money via preparing and serving drinks to pay the rent and keep the lights on (literally – I couldn’t pay my electric bill, which made my apartment dark for the rest of the game). 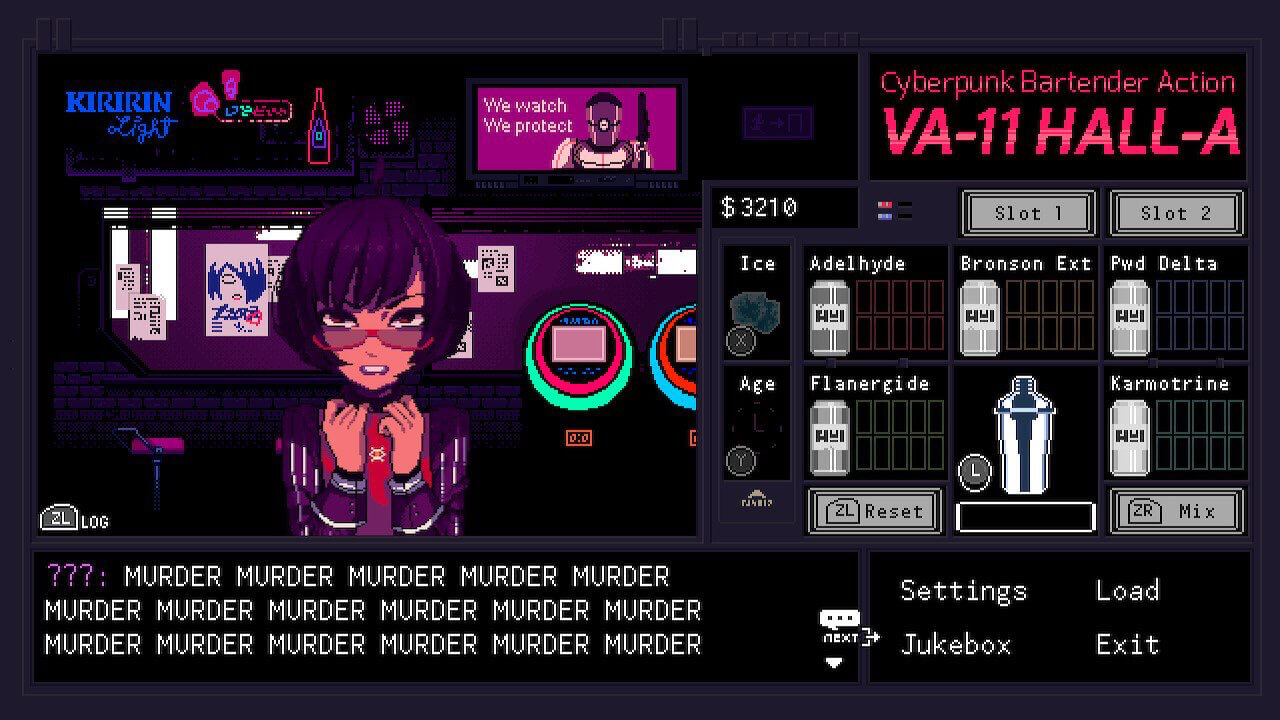 While the bartending mechanics are decent enough, however, the true meat of your playthrough will be found in the dialogue Jill has with the diverse and frequently fascinating array of patrons who drink there day after day.

Unlike some story-heavy games of this type, Jill doesn’t actually have any dialogue options available. This doesn’t mean that she has no influence on the story, though; her decisions on what types of drinks to serve can affect how other characters react. Sometimes this comes across more obviously than others, but the reactions that, say, a heavily alcoholic drink might elicit compared to something more soft never seemed out of place.

I didn’t miss the dialogue options, but if anything, a bit more autonomy for Jill might have added some interesting wrinkles to the story. You can’t refuse to serve someone, for instance, and you can’t mix a drink unless they’ve ordered something. 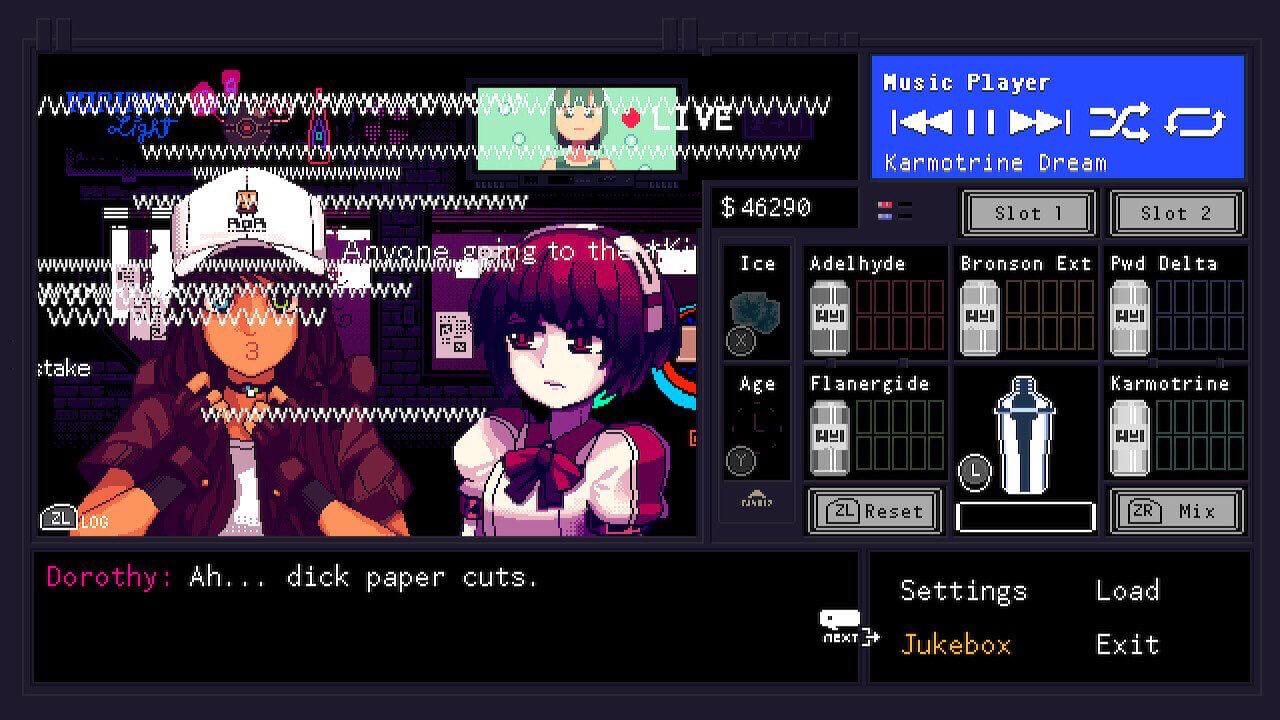 The actual mixing interface works perfectly well, though, and the recipes for each drink are catalogued clearly and spelled out well, so you’ll likely never make something you didn’t intend.

Since you never get to directly explore the city outside of the bar and your apartment, the only real source of information you get about the state of society is through the customers Jill serves during her shifts. This is where VA11-HALL-A truly shines, because even though I didn’t see the first bit of action for myself, the writing felt so natural and expanded upon the world so well that it didn’t feel strange at all for “action” to be part of the title.

Glitch City, where the bar is located, has plenty of problems that will feel familiar to fans of futuristic dystopian fantasy: androids and other types of genetically-altered people are often in conflict with more ‘traditional’ humans, resource shortages make things tense for everyone, law enforcement has grown increasingly corrupt and violent, and those who have more are consistently looking down on and oppressing those who have less.

The characters you’ll interact with are dealing with all of these issues, in addition to their own personal conflicts and problems, which makes Jill’s job feel strangely familiar to anyone who’s ever had a service job that involved chatting up the clientele. A modern-day bartender might not have dealt with an incredibly cheerful robot sex worker or a talking, sunglasses-wearing Corgi coworker, after all, but coaching a regular-turned-friend through family drama seems perfectly within scope. 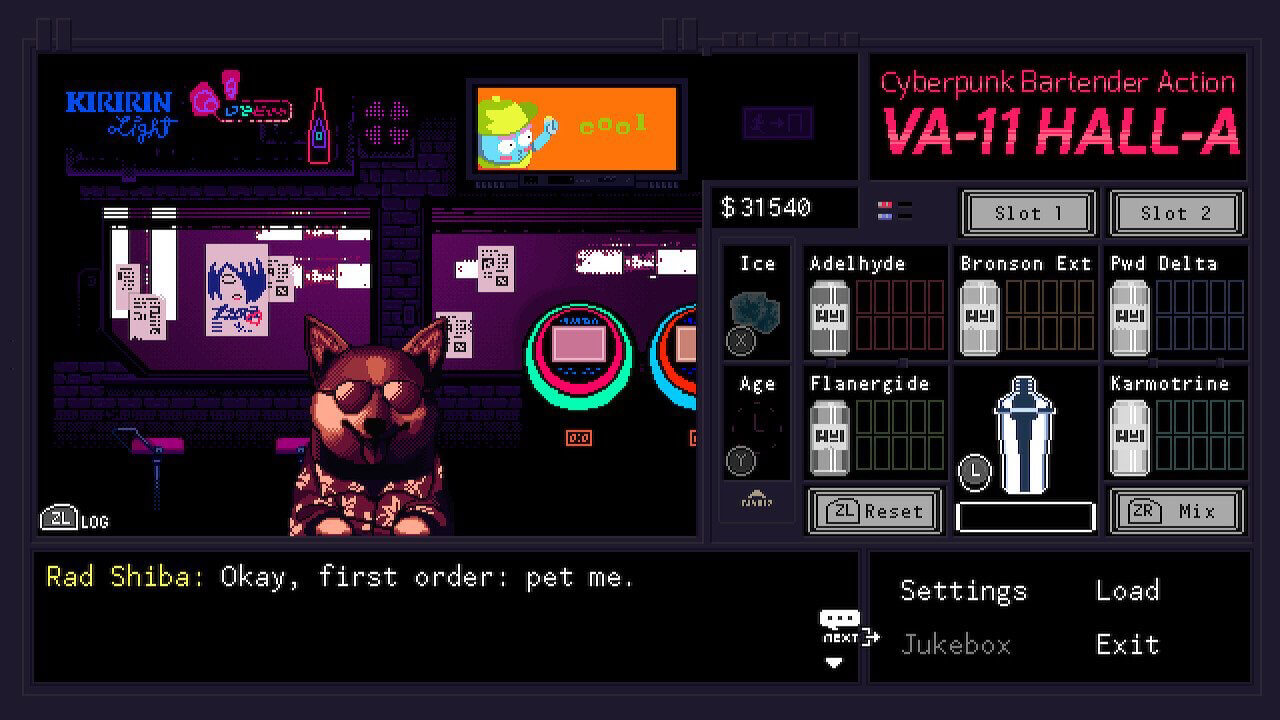 For me, a large part of the enjoyment of VA11 HALL-A was encountering new characters and becoming invested in their experiences and what they had to say, so I don’t want to reveal too much, but I will say that the story, while maybe not tying up all the loose ends that I would have liked, is stunningly scripted and felt quite natural to read through.

The characters have their own voices, and the interaction between those resulted in a group of friends for Jill that I felt fit together perfectly. She helps them through their troubles just as they eventually help her through hers, and although the ending – the one that I got, at least – seemed fairly ambiguous, that felt right for the story, too.

I did want to know more, but closure doesn’t always happen in life or in relationships, and in Jill’s case, that’s not necessarily a bad thing.