I’ve been a long-time fan of the Zero Escape series. I’ve hosted a podcast on Cane and Rinse discussing the 999: Nine Hours, Nine Persons, Nine Doors in depth, and Virtue’s Last Reward was the game that pushed me over the edge to buying my Vita in the first place.

I love its particular brand of storytelling and mystery construction. With the release of Zero Time Dilemma last month, though, I’ve lost my patience for the writing. Zero Time Dilemma, we need to talk. This is an intervention.

Before going any further, I’m writing about a particular twist in the story that I feel is unearned and unfair, so, naturally, I will be spoiling crucial aspects of the game’s story. This article is for those who have finished the game, so come back once you’ve done that.

In this article, I will explain why one particular story moment did not connect with me. Thought I enjoyed the game overall, this revelation betrayed much of what I felt the game was leading up to.

It is, of course, entirely my opinion, and I do not wish to ruin the fun of anyone who did enjoy the game. I cite some commonly-referenced mystery writing conventions, not as a way of enforcing strict “rules” that absolutely must be followed, but rather as a way of providing precedent for the things I didn’t care for (I even point to counter-examples of stories that break the rules intelligently to show that none of these rules are set in stone).

In all of the Zero Escape games, one of the central mysteries is who is Zero?

Each game features a different Zero, and it is always revealed that Zero is a part of the group of trapped survivors, playing his own game.

Throughout the course of Zero Time Dilemma, I had suspected just about everyone in the shelter of being Zero at some point, which is the mark of a good mystery! But I was not prepared for ZTD’s twist.

It is some ripe bullshit. 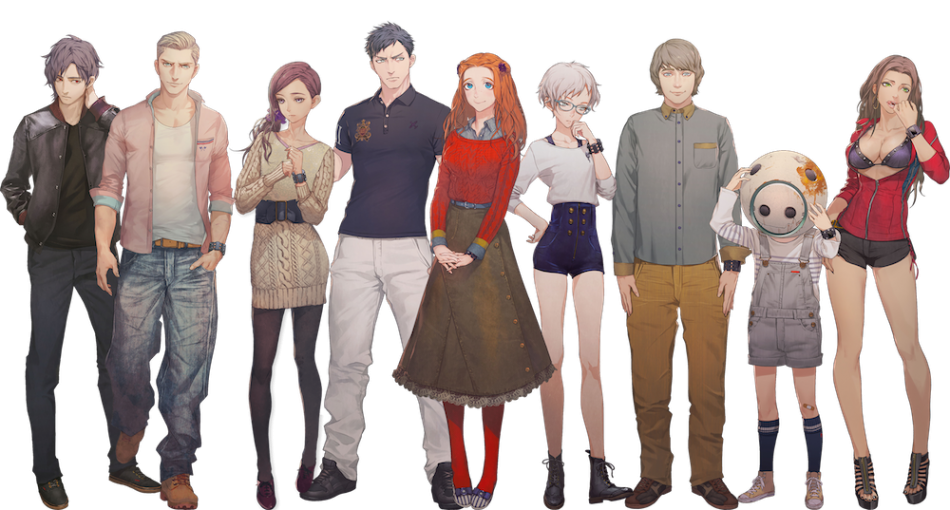 Zero’s identity is revealed in the last half hour or so of the game. Just like before, Zero was right under everyone’s nose, participating in the Decision Game along with the other victims. Known to everyone. Except the player. Zero is revealed to be Delta, a member of the Q team, who the team had previously been calling Q.

Oh, but not the Q that we, the players, know. Not the little boy with the bulbous robot head. That’s Sean. Delta is the old man in the wheelchair. The one who had been off-screen for the entire game. The one that no one had acknowledged or spoke of throughout the entire game.

For me, this is the wrong way to structure a mystery, and it does not make for a satisfying reveal.

While the clever subversion of genre conventions can often make for a compelling and unpredictable read, there are a few unalienable rules of storytelling that should not be strayed from. Due to the tenuous nature of mystery stories, there are more rules holding them in place than most other genres.

Let’s look at Zero Time Dilemma’s twist against a series of rules written by mystery novelist SS Van Dine (the pen name of art critic Willard Huntington Wright), published in 1928, that has served as a handy guide for mystery writers for almost a century.

1) Van Dine writes, “The reader must have equal opportunity with the detective for solving the mystery. All clues must be plainly stated and described.”

This rule does not implore authors to make all evidence obvious and known from the beginning. It only requires that audiences have the same knowledge as the investigators. There any many examples of twists involving the introduction of unknown evidence or people.

The much-beloved Phoenix Wright: Ace Attorney series makes frequent use of last-minute surprise evidence or the introduction of critical characters, but it works because Phoenix is as surprised as the player is to see this evidence. He is caught off guard, reflecting our own surprise. We match his state of mind.

Similarly, Sir Arthur Conan Doyle’s short story “A Study in Scarlet” and the David Fincher film Seven feature culprits who are unknown up until the point of their reveal. There is a wide range of reactions to these particular stories.

Regardless of personal feelings, though, Van Dine’s first rule cannot be leveled against them. The audience had not previously met the culprits because the detectives had not yet met them. They were unknown to the detectives and readers / watchers in equal measures.

In Zero Time Dilemma, though, this does not hold true. When Delta is introduced, he comes as a complete surprise to players, because players had never seen him, but all of the game characters knew of him. He was a part of the group from the beginning, he was just off-screen at all times (even when improbable or impossible, in particular scenes).

2) “No willful tricks or deceptions may be placed on the reader other than those played legitimately by the criminal on the detective himself.”

Again, this is about keeping a level of knowledge-parity between audience and investigator. It’s okay for tricks to be played on the audience, as long as the investigator is operating under the same manipulated misinformation. Manipulation and deception are inherent to the mystery genre. Every criminal tries to cover his tracks.

Yet, in Zero Time Dilemma, different tricks are being played on the players and the characters, and that disparity is completely unnecessary. The players are being manipulated to believe that Delta does not exist while the characters are operating under the belief that Delta is blind, deaf, and confined to a wheelchair.

Perhaps the writers felt that having such an otherwise unimportant and disengaged character in the cast would make the reveal obvious, but pretending that he does not exist while the other characters are being actively silent about him.

5) “The culprit must be determined by logical deductions — not by accident or coincidence or unmotivated confession. To solve a criminal problem in this latter fashion is like sending the reader on a deliberate wild-goose chase, and then telling him, after he has failed, that you had the object of his search up your sleeve all the time. Such an author is no better than a practical joker.”

The reveal of Delta is prompted by a text input. We, as Sean, must accuse the real Zero by name. We may have our suspicions of the various characters, but, by this point, we also have evidence that disconfirms many if not all of them.

So who do we accuse? We try the dog’s name. Worth a laugh, but obviously not true. The only other name that we had been introduced to in the story is Delta; a baby who had been sent back in time from an alternate timeline. His absence from the story despite being a named character is really the only reason to suspect this troublesome toddler. The player comes to this realization because every other option is exhausted and eliminated. Sean knows this name because… well, that’s a bit unclear. Let’s just say that he’s conveniently psychic at times.

10) “The culprit must turn out to be a person who has played a more or less prominent part in the story — that is, a person with whom the reader is familiar and in whom he takes an interest.”

This speaks for itself. Delta did not play an important part in the story. The game spent the vast majority of its time pretending like he wasn’t in the room.

15) “The truth of the problem must at all times be apparent — provided the reader is shrewd enough to see it. By this I mean that if the reader, after learning the explanation for the crime, should reread the book, he would see that the solution had, in a sense, been staring him in the face-that all the clues really pointed to the culprit — and that, if he had been as clever as the detective, he could have solved the mystery himself without going on to the final chapter. That the clever reader does often thus solve the problem goes without saying.”

I would have forgiven everything else if the game just delivered on this principle. I would love to play the game again and see, “Oh! When they’re talking to Q, they’re not actually talking to Sean after all!”, but unfortunately repeat play-throughs are only met with more disappointment.

There is the occasional shadow from off-screen that eagle-eyed players can see, but it does not adequately cover every discrepancy introduced by the late-game introduction of a new character.

Not only is there a lack of evidence about Zero’s identity, but there is contradictory evidence! Zero Time Dilemma is chock full of plot holes.

If the twist would have us believe that Delta is a part of the Q team while Sean is not, why is Sean’s portrait in the study alongside everyone else’s (except a notable lack of any Delta portrait)? Why did the team never remark upon the fact that they had four members rather than having three members, as the rules and many pieces of auxiliary evidence pointed to?

If the team was called the Q team, and the rules state that only the named team leaders can make decisions for the team, why did Sean make decisions when the twist posited that Delta was the one that everyone had assigned the name Q? Though the videos of Zero are pre-recorded, what accounts for the times in which Zero appears in person? Does the Q team recognize that Delta is not there?

Zero Time Dilemma was a thrill-ride. I was never bored during my play-through. Even if a bit idiotic, it remained engaging from beginning to end. But that does not excuse lazy storytelling. For that reason, I have to call bullshit on Zero Time Dilemma’s twist.

The cherry on top of the Zero Escape sundae is, unfortunately, a bit rotten.