The term ‘game feel’ – or ‘kinaesthetics’ – as the YouTuber Errant Signal puts it, is a term thrown around fairly regularly in games, and the way a game affects one person might not necessarily affect another. I can only speak from my own personal experiences, however my definition of great game feel is when all of a game’s combined parts slot together to provide the player with audio and visual feedback that sucks them into the experience.

A case in point would be the combat in Zone of the Enders: The 2nd Runner (ZoE2). Now, what is it about the combat in ZoE2 that elevates its gameplay to a status of great game feel, as opposed to the combat in other games? I would like to use a sandwich as a metaphor for this. 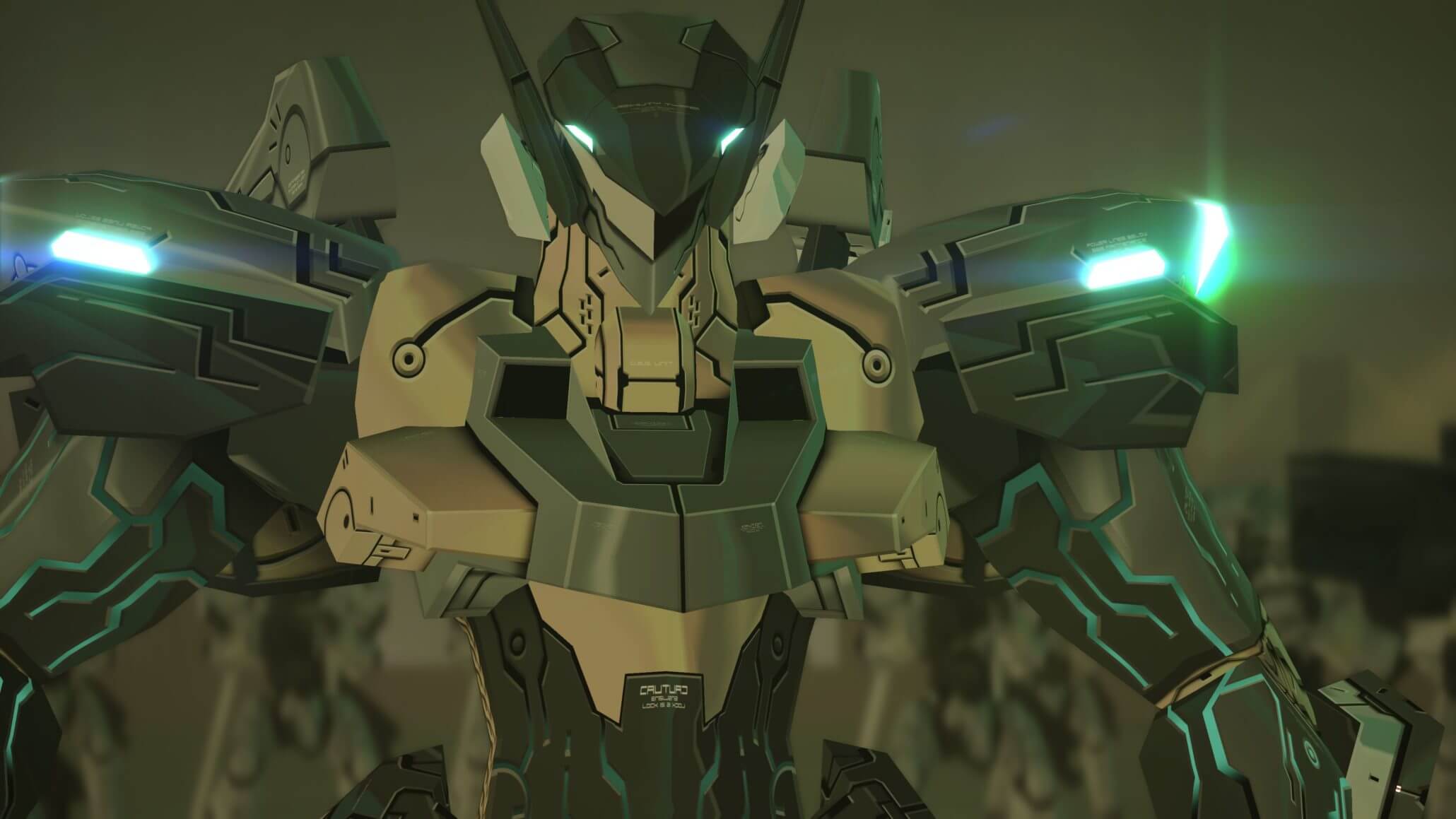 Let’s start off with one slice of bread, which is protagonist mech Jehuty’s primary and most used weapon: the blade. This is a sword-like weapon which cuts through the enemies and bosses like butter, with the sword looking visually sharp, the SFX sounding like you’re slicing through metal and wires with the enemy reeling backwards sharply with every hit you land. The game has established that the sword isn’t a pathetic weapon and it certainly makes me believe through the audio and visual feedback that I can cause a lot of damage with this weapon.

The other slice of bread refers to Jehuty’s movement. The player is able to perform aerial manoeuvres at lightning speeds, thanks to the extremely responsive controls. Dodging, boosting and flanking around enemies is a piece of cake, and while playing I could scarcely believe I was managing to pull off these incredible tricks with my controller. This direct control is another point which brought me closer to the sense of great game feel, minimising the disconnect where the player realises they are actually sitting on their couch moving a bunch of polygons around on their TV.

Finally, the filling of the sandwich is a nice mix of audiovisual peanut butter and banana.

Combining the blade that I mentioned above with the movement abilities of Jehuty, creates this epic ducking and weaving dance of death, where you are trying to dodge the enemy attacks, whilst finding openings in their attack patterns to strike. This by itself already completely absorbed me and the sensation of great game feel in the game is topped off once again by the audio and visual feedback you receive: this is our sandwich filling. 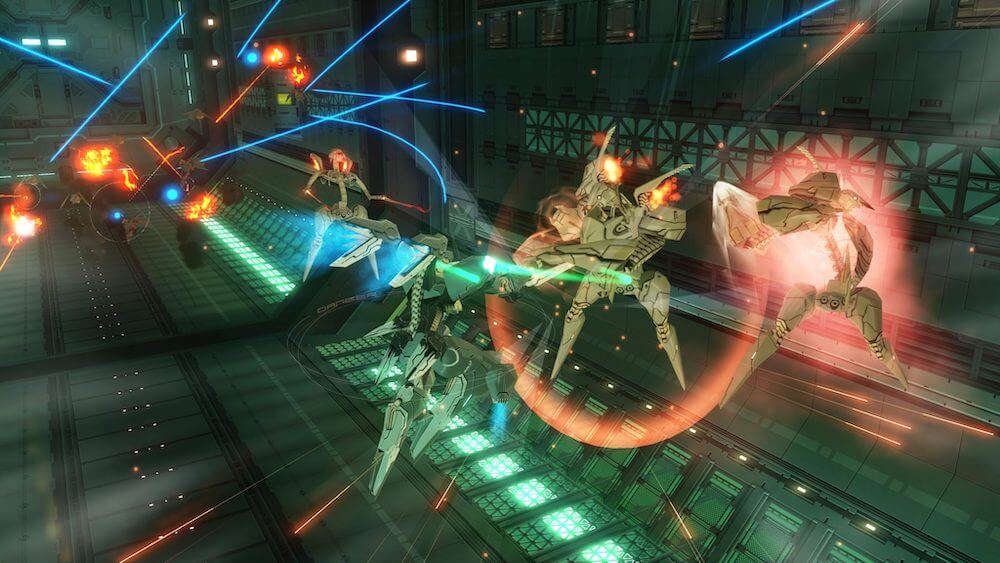 Case in point, when diving head first into a group of unmanned frames (the game’s name for these large yet agile combat mechs), whilst slashing away at them, every hit sounds satisfying to me and the bright visual effect received when you’re wailing on your enemies, instantly communicates that you are damaging them in a meaningful way. The way the mechs blow up with such visual splendour also never gets old. The bright visuals also help to bring out the hits from all the other overwhelming elements. The sound is also very strong when bouncing off enemies as they deflect your attacks with their own blade; it’s almost as if you’re participating in the universe’s deadliest fencing match. The sound that the boost makes as you attempt to find a better angle/elude enemy fire, enhances the sense of speed Jehuty is able to reach, drawing you even further into the game.

The developers didn’t stop there when creating this satisfying game feel sandwich. Just when you thought the main gameplay loop of attacking and sidestepping with the blade couldn’t get any better, they decided to throw in more attacks, as well as sub-weapons, for Jehuty to work with. This adds to the overall game feel by evolving Jehuty from a capable war machine into a god of destruction. Because I was so connected to Jehuty through the core gameplay loop and tight controls, I in turn felt that I was growing along with Jehuty and that we were both going on this incredible adventure together.

To juxtapose what I’ve been described as great game feel so far, I’d like to describe what I feel bad game feel is.

Take Aliens: Colonial Marines (please); While the look and sound of the pulse rifle and some of the environments definitely make me feel part of the well established and much loved Aliens universe that the game is attempting to portray, everything else about the game takes me straight out it. Whether it’s the aliens running mindlessly towards me with jerky animation or the way they unrealistically react when being filled with bullets, not to forget the glitchy enemies and finally including other weaker sounding weapons and many more issues. All of these problems conspired to completely pull me out of the experience.

To summarise, ZoE2 represents the epitome of excellent game feel to me. I was instantly engulfed and became Jehuty until the credits rolled at the end of the game. I personally have rarely connected with other games as I have with this one.

Prime examples of similarly enjoyable experiences of great game feel are: Super Meat Boy, Crash Bandicoot, Rocket League, Street Fighter IV, Halo 2, Counterstrike and many more. What I feel ZoE2 and the games listed above have in common is: tight controls that never fail the player and brilliant audiovisual feedback that are appropriate to the game’s setting and characters that inhabit the world.

In short, ZoE2 is an absolute treat, and in gaming terms a real peanut butter and banana sandwich: a solid foundation of gameplay bread on the outside, with a gooey, rich smattering of complementary content on the inside.

(Editor’s note: Make it an extra mature Cheddar plus Heinz ploughman’s pickle and I’m with you).

All screenshots used are taken from Lacry’s YouTube playthrough, which can be found here: