I’ve selected the Western Daemon, my chopper of choice from the new Biker DLC and I’m pulling out of my garage.

I’m considering how to earn some money to contribute to The Rinsers M.C.’s ever expanding business portfolio.

That Cane and Rinse branded Methamphetamine lab we’ve been working towards looks like it’s within reach, soon we’ll be lining the streets with ice and swimming in filthy lucre a la Scrooge McDuck.

Then within two seconds of my door opening, a proximity mine blows both myself and my beloved bike to kingdom come. On my own doorstep too… how embarrassing.

I expect no less to be honest. This is par for the course with GTA Online and if I’m being self flagellating about it, I chose to live in the apartment building which houses the vast majority of San Andreas’ most hardcore high level players, I’m partly to blame. 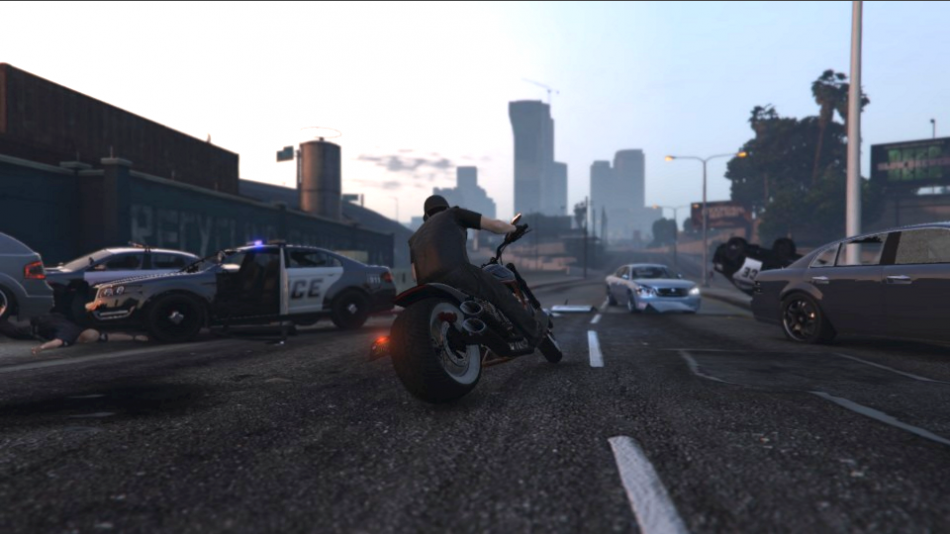 Anecdotally, this seems to be a pervasive experience among many of the players with whom I’ve spoken to, and it appears to be a major contributing factor as to why there’s such a drop off among the those who find GTA Online not just unpalatable or unenjoyable, but in some instances unplayable.

On the surface, GTA Online does little to persuade players from trolling others relentlessly, especially with regards to punitive measures.

There’s a trivial mechanic in place for situations such as mine. I’ll spawn around the corner sans vehicle and the troll will pick up my Mors Motor Insurance claim, anywhere between $5,000 and $11,000 for the pleasure of inconveniencing me for three minutes.

It’s far from dissuasive given that it’s possible to recover that money through a five minute contact mission.

There’s also the ‘good sport’ mechanic which rewards you around $2,000 a day for demonstrating good behaviour, such philanthropy.

I can see how it may be infuriating, especially if you’re of low level and you don’t have the equipment to exact your revenge or indeed, how you may feel at the whim of the level 400 predators.

On the flip side I can almost empathise with the fun of agitating someone to the point where they give up (if that’s what you’re into) if you’re level 400, you’ve earned that right.

It’s been the same since day one, and it’s likely to be the same for as long as the servers are up.

There’s clearly a market for Rockstar to cultivate this type of behaviour. 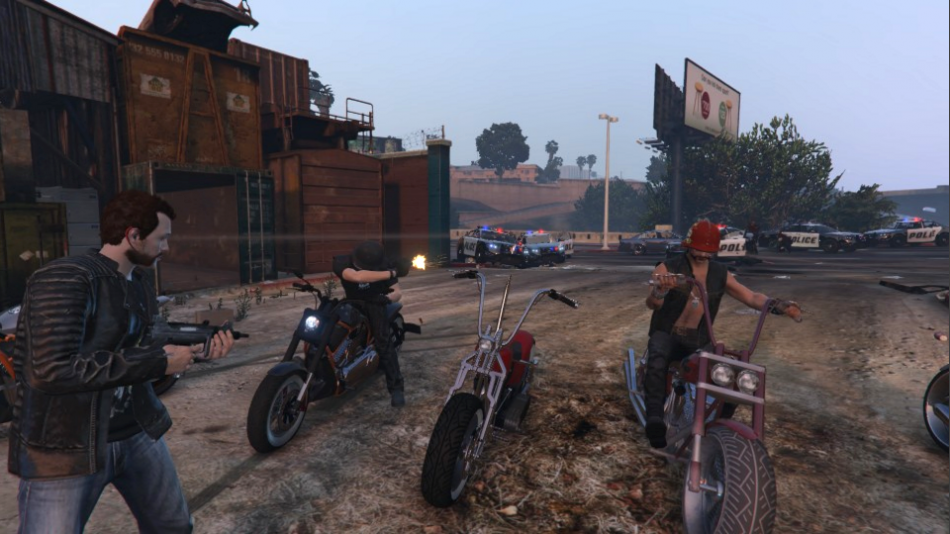 Here’s the secret though, you’re not actually powerless at low level.

Rockstar have from it’s inception put in place robust methods for players to experience the game without having to interact with others.

Don’t like the uncertainty of playing in the presence of players? Launch a friends only server. In a server packed with trolls? Apply passive mode through the personal menu.

It still stuns me that players not only don’t take advantage of such features, but simply don’t know of their existence, perhaps that’s a fair criticism you can level at GTA Online.

That said, if you have any knowledge of the features, you can see how Rockstar have been able to strike that beautiful balance of empowering pacifists and anarchists alike.

To a person who has spent the same degree of time playing as I have, GTA Online’s character no doubt would suffer if the game demanded compliance from players to behave in accordance with real world laws.

With that in mind, Rockstar have really addressed this nuance is their updates (free updates may I add) in which they’ve continued to challenge this equilibrium.

When compared to the current GTA Online, the initial iteration was rather spartan. Players had the free roam, a selection of races, death matches, horde modes, contact missions and some variations on a theme such as Top Fun, it’s no surprise that with little aim the public servers grew to be toxic.

Since this, each major update has added new focuses and new game modes. Many of which augment the existing formula and challenge the sense of dependence on lobby based game modes such as the Heists or the Cunning Stunts, both of which are entirely separated from free mode, and to my mind brought some well needed structure to chaotic public servers. 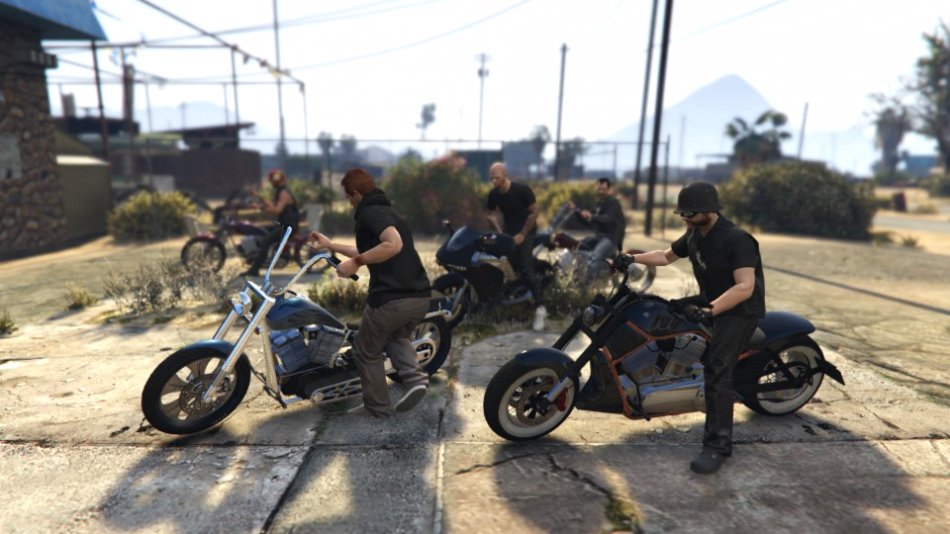 Particular reference must be made here to the CEO and Biker updates, which for my money are the future of not only GTA Online, but the GTA franchise.

A requisite of these modes are that you conduct your business entirely in a public server often tentatively transporting vehicles packed with dubious products from point to point in servers populated by some especially hostile players.

GTA Online launched 17 September 2013, the CEO update 7 June 2016. At this point the player base had three years to amass much military grade vehicles and weaponry, additionally, Rockstar have broken down the level requirements and made available a wall of specialist armaments in each Ammunation for everyone, now it’s entirely feasible to be a level one player, and pack a homing missile, machine gun and battle axe if you have the money to do so.

At launch, my immediate reaction was one of disgust against the game mode, as I could not perceive how under any circumstance a CEO would be able to make the shortest of journeys without a hail of explosives ruining hundreds of thousands of precious in-game dollars, when I (armed to the teeth) often struggle to make it to the nearest convenience store.

Having invested some time in these particular game modes, I can see that Rockstar have made clever concessions to ease in the cooperative elements of the CEO and biker updates to gently coerce players to work together.

Through clever implementation of mechanical advantages in protecting relative strangers, such as a health and armour boost when riding in formation, or the ability to drop armoured company vehicles for associates in need.

Perhaps importantly, Rockstar have clearly mitigated the risk of working with strangers and recognise that this time is valuable to the player. Cooperating in this way is incredibly financially lucrative as a CEO or an associate. 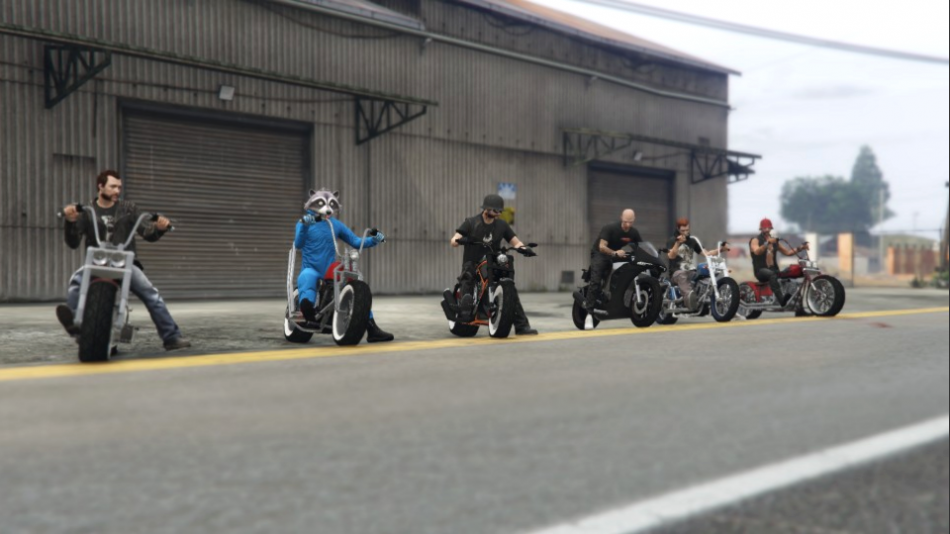 With this in mind, you can almost chart the shift away from the original anarchic style of play to one of opportunity and cooperation as time progresses.

Three years in and GTA Online still maintains a sense of freshness and a genuinely holistic and emergent gaming experience, in which you are rewarded in equal measure for identifying with other players and their aims/objectives, or identifying against them and hindering their success.

I’ll put my cards on the table, you don’t spend 263 hours of your life in a game that you don’t enjoy, I’ve mentioned that my personal belief is that GTA Online is the future of Rockstar’s open-world games.

It’s been an incredible financial success for Rockstar as they’ve reportedly brought in north of $500 million in Shark Card micro-transactions alone, but let’s not forget they have continually pumped out quality free content.

To put some context on this, my statistics show my gross earnings at $15 million and I’ve never once felt inclined to part with money, nor been pressured with in game marketing to do so.

The argument that Rockstar are moving towards micro-transactions to nickel and dime players seems absurd to me.

Some may recoil at the thought of this change if you are precious or protective about the story-driven content of Red Dead and GTA single player, but I assure you that the sophisticated scripted action and satirical humour the series has been lauded for is present in the online game mode itself (especially in the Heist mode).

Perhaps most importantly, the questionable themes and portrayal of women (or indeed their recent lack of representation in Red Dead Redemption 2 marketing) in GTAV is measurably mitigated in GTA Online, where every player is ostensibly treat as a silent, androgynous and asexual protagonist, guided narratively entirely by your own whims and imagination.

I invite any lapsed players to reconsider their position on GTA Online, it feels barely recognisable from it’s original form.

Should you want to join a positive group, grab a rat bike, a cut-off denim jacket and reconsider your stance on the proliferation of class A drugs in San Andreas. Then join The Rinsers M.C. on PS4; a healthy community is ready to play with you pretty much every day at the time of writing.

This feature was kindly contributed by Richard Davison, aka @Follow_My_Ruin from the Cane and Rinse community, and ties in with issue 238 of the Cane and Rinse podcast. All images within this post were taken during our most recent online session.