Home » A look inside The Talos Principle with Jonas Kyratzes

Last month I played through Croteam’s The Talos Principle and its expansion Road To Gehenna. The game, in my opinion, sits among the greats in both its puzzle design and storytelling.

The semi-open world approach to solving puzzles took me back to my (sadly short) time spent with The Witness, while the story is told through a blend of voiced characters and text-based logs and interactions. Neither facet of the game threatens to overwhelm the other, and my total playtime (of both the main game and expansion) clocked in at a cozy 25 hours.

I reached out to Croteam for an interview, who put me in touch with one of the writers of the game, Jonas Kyratzes. He answered questions on the connection of story and gameplay, narrative inspirations, the writing process, and more.

The Talos Principle contains ideas from Greek, Egyptian, and Christian philosophy and religion. What other sources did you draw inspiration from? Was there a particular reason for putting these in the forefront, and was there anything that you would have liked to include but could not?

The game’s narrative is in many ways structured to reflect its gameplay, so it draws prominently on sources that represent its three main visual styles/worlds. Thus its focus on themes and ideas from classical antiquity, ancient Egypt, and medieval Europe. Other important sources (for me, anyway – I believe my co-writer, Tom Jubert, was more strongly influenced by contemporary philosophy, but I don’t want to put words in his mouth) are William Blake’s The Marriage of Heaven and Hell and John Milton’s Paradise Lost. There are many more, of course, this being a game all about synthesis. We stole from everywhere.

There were several texts we would’ve liked to include, but couldn’t. Not because Croteam didn’t want us to, but because of copyright. Some of them were 20th/21st century texts, and some of them were modern translations of older texts. There was one case, the extracts from Immanuel Kant’s Idea for a Universal History with a Cosmopolitan Purpose, where I had to write a new translation myself, as all the ones in the public domain were extremely archaic, and the newer ones were still in copyright.

The story is a driving factor of the game, yet remains almost completely separate from the gameplay. How important was this separation to the team when working on the game?

I don’t think the story is separate from the gameplay, but it is positioned differently than in most games – in a sense, it is underneath the gameplay, waiting to be dug up. Every aspect of the gameplay is tied to the story in some way – but these interconnections are left for the player to discover. This was entirely intentional, as we wanted players to pursue the story themselves, in the spirit of exploration and analysis that is central to philosophy, and not to have a ton of exposition just forced on them.

In a similar vein, when I watched my brother play the game, I had to direct him to the first computer terminal, lest he completely pass it by. Was there any concern that by separating the story and gameplay some players may miss it by accident?

No, we were aware that this could happen. The game is designed so that every player will have *some* narrative experience – even without reading anything, the story of ELOHIM forms a complete emotional and philosophical arc. The depth of that experience, however, is up to each player, and how deeply they want to dig. Not unlike real life. 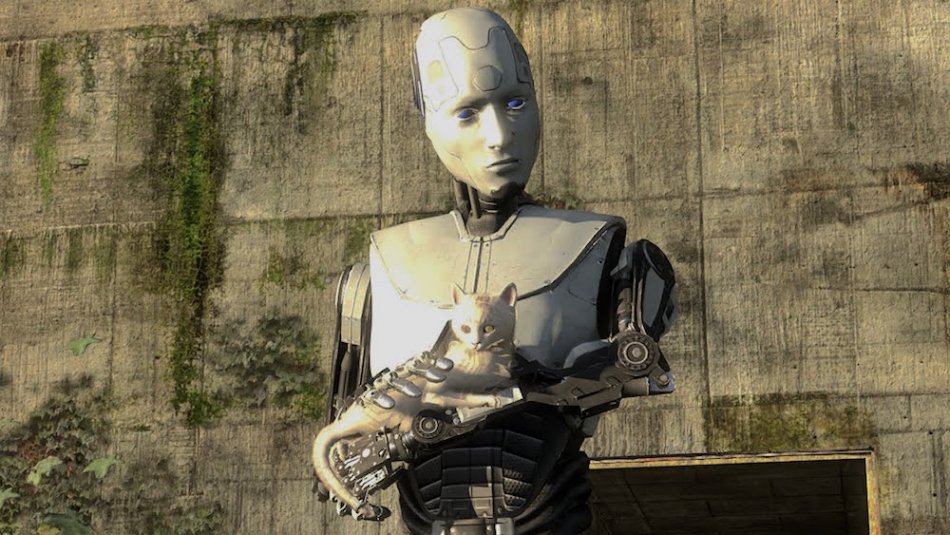 For me, the terminals always felt like a treat after completing so many puzzles. What was the process like to find a good balance between not overwhelming players with text and story, yet still giving them enough to keep them interested?

It was trial and error, really – going by gut instinct and seeing how it felt, then adjusting. In the beginning we overcompensated out of fear there would be too much text and wrote way too little, which made the game feel kind of disappointing. So we decided it was much better to create a rich, rewarding experience that players could explore as they preferred.

Following the last question, what was your and Tom’s process in determining how each character would be presented?
For example, Elohim is the ‘God’ character, and it is fitting for him to have a booming omniscient voice, but there is only one other voiced character, the scientist Alexandra. Did you find that having too many voiced characters detracted in some way, either to the player experience of the gameplay or to how you wanted them to interact with the story?
Similarly the base game has only one character, Milton, that the player directly interacts with, while Road To Gehenna adds a whole cast of characters. Was there ever discussion of having more characters to interact with in the main game, or did you feel that that would take away from Milton’s character, and the sense of isolation in the story?
In other words, how did you decide when adding something to the story took away from its impact?

It all evolved fairly naturally out of the game’s premise, really. Once we’d decided what the game was about thematically, it wasn’t so hard to come up with who our main characters would be and how they would be presented. Given who ELOHIM and Milton are, it makes sense to present one as a booming voice and the other as text. The only one who could’ve gone differently is Alexandra Drennan. Her recordings could’ve been text, but it was incredibly important to me that she was voice-acted, because I wanted a genuinely human voice in the game, representing the very best of humanity. That’s also probably the part of the game that I love the most.

It made logical sense to have the player be fairly isolated in the original game; it’s just part of the premise, really. But with Road to Gehenna, we wanted to create something really different, not just some cheap “more of the same” DLC, so we decided to explore some new aspects of the story, based on elements that had only been hinted at previously. The very limited character interactions in the QR codes of the original game had been interesting and fun, so that was a pretty natural route to take.

Final question: What would you recommend, in any medium fiction or nonfiction, for people interested in the ideas presented in The Talos Principle?

Ooh, that’s tricky. We got asked something similar before the game came out and ended up producing a fairly long reading list, which I still feel is too short. I could recommend William Blake’s The Marriage of Heaven and Hell, a truly inspiring, thought-provoking work. In terms of philosophical materialism – which is what the concept of Straton’s Talos Principle is all about, after all – my own personal influences are very much in the Marxist tradition, so I could recommend works by Marx or Lenin or Trotsky. Then there’s the other giant who helped define this game, one of the greatest individuals ever to walk this Earth: Carl Sagan. But I think the very best recommendation I can come up with is a writer who combined all these elements into perhaps the most ambitious novel ever written: Olaf Stapledon and his masterwork, Star Maker. Read that.

Jonas Kyratzes is a writer, games designer, and filmmaker. You can find his work on his website.