Sean Thomas speculates as to just how much the mighty Monolith Soft were responsible for The Legend of Zelda: Breath of the Wild’s success

I’m stood on top of a mountain. Link is shivering. And I wonder what I’m doing up here… I recall someone – a young girl I think? – telling me to keep an eye out for three tall trees on the horizon. I caught a glimpse of them through the cloud but got distracted by a shimmering flower growing on a cliff face. But now the rain has set in and I’m disorientated. I hope those trees are just over this horizon, but if they aren’t then that rock formation over there looks intriguing…

Breath of the Wild is lauded by many as a generational leap in open-world (or ‘open air’ as Nintendo prefer) gaming, due to how seamlessly it ties together so many complex ideas. An entirely traversable world. Dynamic weather systems that radically affect the experience. Game mechanics based on real world physics allowing for multiple solutions to dilemmas faced. Several of these things have been tried before but perhaps no-one has managed to make them mesh together so cohesively and sympathetically before. 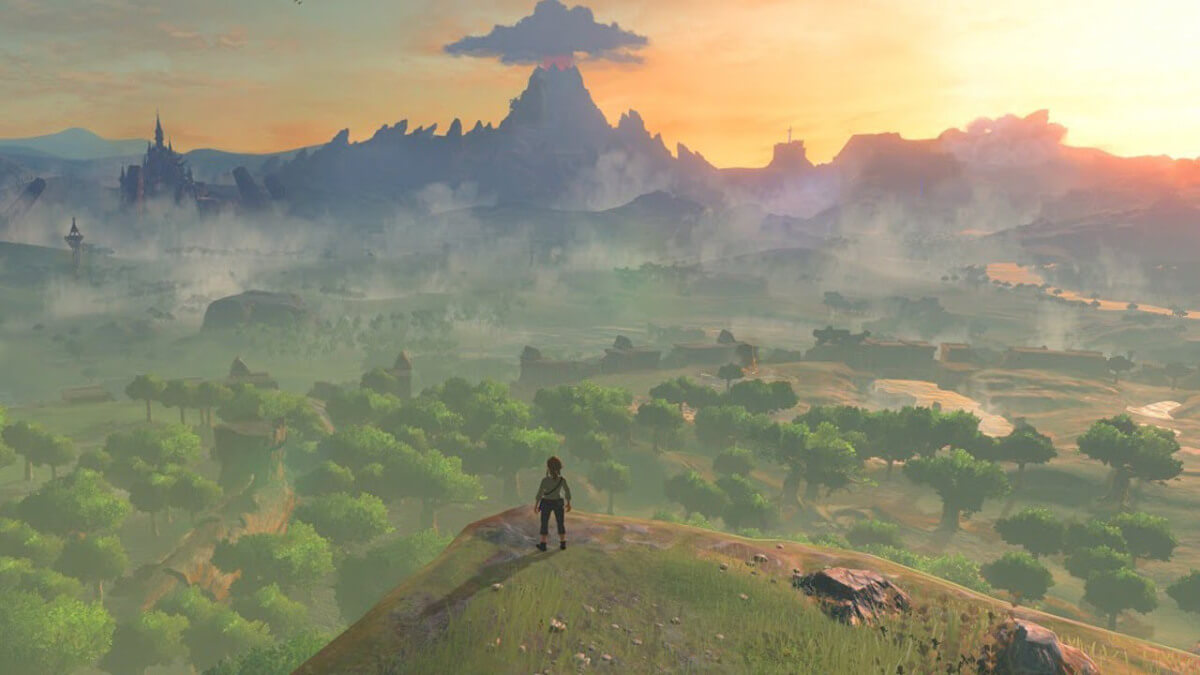 But for many, Hyrule itself was the true star. It treated you like an adult (or perhaps, more accurately, a naive child) and said ‘go explore’. The topography subconsciously helped tell you where to go, items twinkled intriguingly in the distance and the high vantage points often revealed a way forward.

This experience was a revelation for many gamers, perhaps even more so than the intricate in-game systems, but for me felt warmly familiar. For I recognised many of these traits instantly from my time playing two older Monolith Soft JRPGs: Xenoblade Chronicles (XC) on Wii and Xenoblade Chronicles X (XCX) on Wii U.

It may seem a strange concept now, but for several years questions hung over the latest Zelda title. Delays, concerns over Skyward Sword’s antiquated systems and size compared to open-world titles on other platforms coupled with the increasing sense that Wii U was doomed meant there was little to truly get excited about for a couple of years other than one lovely concept drawing.

Intriguingly, in June 2016 we learned that Monolith Soft were helping Nintendo develop the latest Legend of Zelda game. We’ll likely never truly know the role Monolith Soft served, such is the Willy Wonka-esque mystique around what goes on inside Nintendo HQ, but in an interview with Gamekult in January 2017, Breath of the Wild producer Eiji Aonuma said this about Monolith Soft:

“For Breath of the Wild, we’ve been assisted by level designers used to large game areas, in order to make topographic arrangements.”

Aonuma’s statement resonates with me as someone who has extensively experienced all 3 of those games and makes me wonder: how much did Monolith Soft help save, or certainly refine, Zelda? And were the Nintendo team making Breath of the Wild heavily inspired by the Xenoblade titles?

I present, the evidence.

Mechanically, all share similar traits: Landmarks are spaced out to encourage you to still wander, but enable you to fast travel to them (something which seems standard now but was a eureka moment for all open-world games and JRPGs when XC launched).

When found, these landmarks also unlock areas of the map previously hidden on the overview. Names of places you’ve visited appear on screen and on your map so you know where you have and haven’t been.

Items litter the environment for you to collect, but which also cannily serve as subtle waypoints to subconsciously guide your route through the world; Breath of the Wild just disguised this far better by making the objects look real as opposed to glowing orbs. 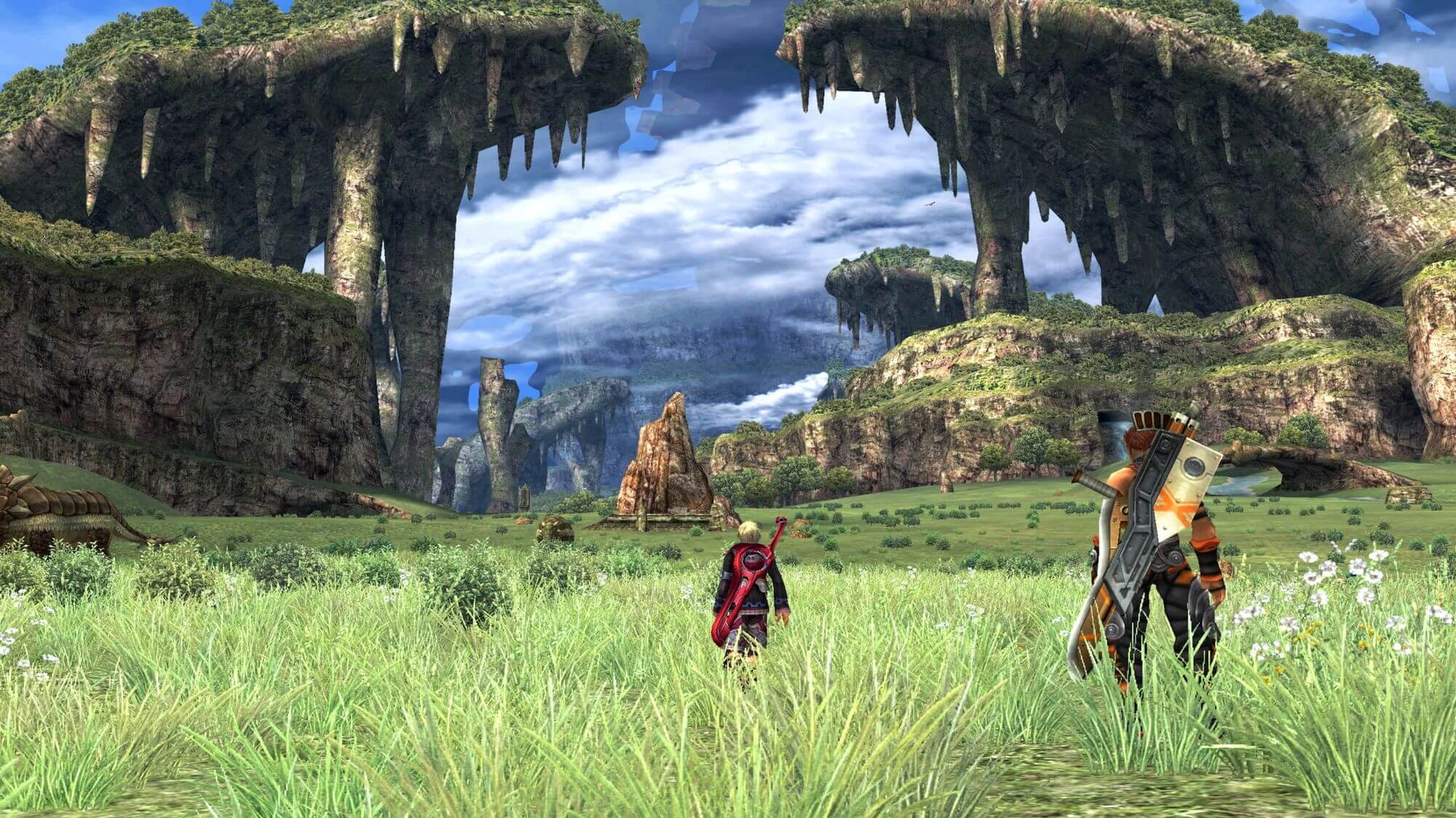 But the star of all three games are the memorable worlds themselves. More specifically, the magic lies in how the developers make you feel like you’re the one discovering both these epic vistas and hidden quirks for the first time and in your own unique order. Here it gets really interesting, as Breath of the Wild learns some valuable lessons from both Xenoblade games’ strengths and weaknesses.

The stars of XC were the giant, ancient landforms you travelled across called Bionis; fallen Gods who now lie dormant. You journeyed over both continents exploring their highly creative scenery as the ambitious story unfolds.

XC did this by controlling your journey within these areas; each region was vast even when taken in isolation but also connected to subsequent locations by routes that funnel you along an intended path. It meant that whilst you could race ahead to the next zone or do side quests that stretched across the entire map, your progress was paced and linear.

XCX threw that out of the window. Mira is an alien world that your vessel, a life raft containing the last of the human race, crashes into.

After a short tutorial based in your new city, you can go wherever you want, meaning the story was sparse and a background feature compared to the exploration. And bar a few vague hints of where might be a good spot to investigate, you largely do that by heading towards the most unusual looking landform.

These include huge ancient alien spaceships embedded in deserts, volcanoes with robot factories in their centre, beaches suspended in the air and a rainforest with giant carnivore vegetation in it that dwarfs your party. 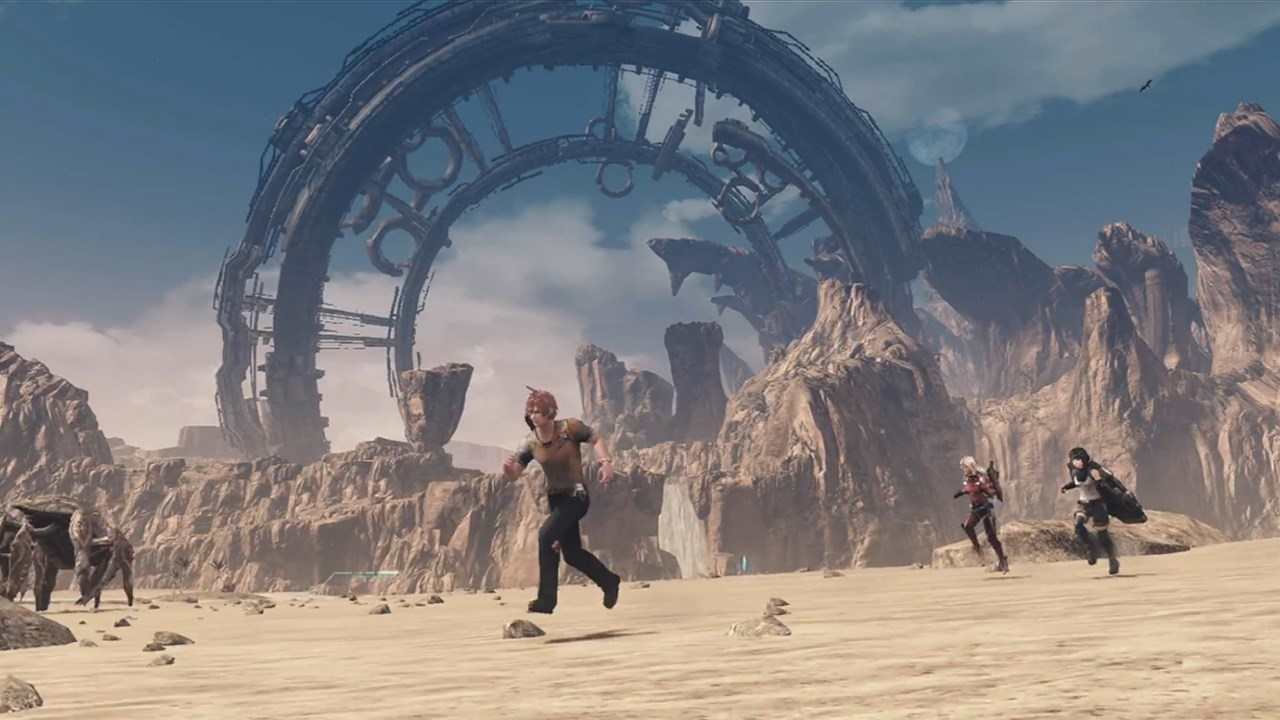 Both games use epic, imaginative scenery to lure you to points of interest – I’ve long felt the design of these worlds far outshine most of what you see being created in Hollywood sci-fi.

But beyond the big features, it’s the little details that have to do the hard work. To ask you to traverse these worlds based just on curiosity is a gargantuan task. Landscapes need worn patches of grass to indicate someone has been up there before. Waterfall pools need to look slightly odd so that you know there’s an alcove behind the cascade. Rock formations need to be designed so that your memories of beach holidays tell you that the sea has likely carved out a cave nearby.

It’s a colossal labour of love and an approach most games can never expect to reproduce. But because it’s so rare and perfectly executed, like the real world, you get lost in its intoxicating beauty and potential.

There are a few other interesting similarities worth touching upon.

How XCX dealt with the issues of embedding a story (a vital component of a traditional JRPG) into a truly open-world experience is also intriguing when viewed in the context of Zelda. Both games give you an introductory opening setup but all subsequent chapters of the story occur when you hit certain orchestrated moments in the game. The Memories in Zelda function similarly to the Affinity Missions in the Xenoblade games; optional scenes that flesh out the storyline and characters for those who hunt them out and crave more story.

Side missions in all three games largely ask you to fetch, battle or discover. The one major exception in Zelda is Tarrey Town; a lengthy mission that forces you to visit the entire world, make friends, locate resources and get a thriving town up and running. 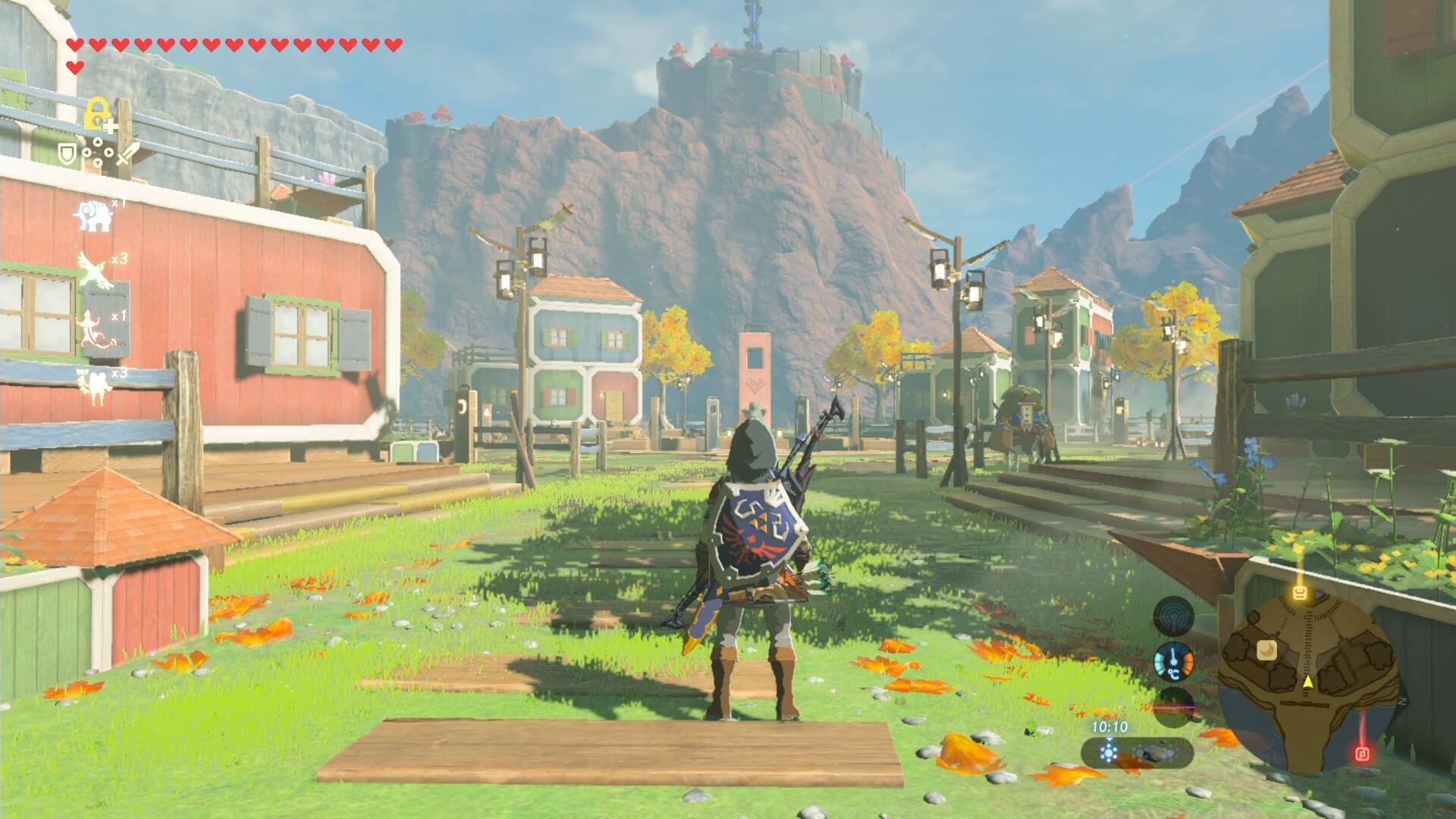 Guess what… Yup, XC did this many years ago. Your quest begins in Colony 6 in that game, and you often hear rumours of other settlements on your travels. Eventually, you find one and have a decision to make. Leave the people there in squalor but relative safety or start to help them get their lives back on track.

I lost days trying to do the latter; finding rare items, venturing to remote locations and asking displaced alien races to make friends with their former enemies. Sound familiar? Tarrey Town rightly has a cult fanbase who see it as one of gamings most fascinating and progressive subquests. But it pales compared to the transformation you see Colony 9 undergo.

There are some other features that seem familiar between the series. The most obvious comparison to the giant towers in Zelda comes from Ubisoft game series’ such as Far Cry and Assassin’s Creed, but XCX had form here too. You had to locate nodes to mine for ore, which then unlock the map. However getting to some of these is a puzzle in its own right. Some require sneaking into an enemy base, others making it to the top of a very hard to reach area.

Running around on foot in XC never got old for me but, 20 hours into XCX’s even vaster world, it was starting to take its toll. So it was a smart move to introduce the Skells 40 hours in; Skells are giant mechs that allow you to traverse the world in entirely new ways both on land, sea and air.

Suddenly parts of the world you hadn’t noticed become reachable and the game gets a second wind. In fact it feels like an entirely new experience as the combat alters completely too. Zelda did this in more subtle ways (as the paraglider is given to you early on), but the Zora armour and Revali’s Gale ability are both there to help you scale the more challenging parts of the world in new and interesting ways should fatigue start to set in.

Namco sold Monolith Soft to Nintendo in 2007 and the studio has helped out on Animal Crossing: New Leaf, Splatoon and Pikmin 3. It also created design art assets for The Legend of Zelda: Skyward Sword.

There will always be a charming mystique around how much of the latest Zelda title was Monolith Soft’s work, but I believe Breath of the Wild would have been a totally different experience without their Xenoblade series and involvement.