When Michel Hazanavicius’ award-winning black and white silent film The Artist arrived in cinemas in 2011, audiences were captivated by this wordless wonder. The film’s protagonist, George Valentin (Jean Dujardin) the leading light in the silent film era, finds his career and life unravelling with the arrival of the “talkie” era of Hollywood.

The film places an emphasis on score and gesture to balance the lack of spoken word. The score by Ludovic Bource perfectly takes the viewer on Valentin’s journey through success, ego, loss, love and depression with tremendous grace.

Hazanavicius’ direction along with the stellar performances of Dujardin and co-star Bérénice Bejo (Peppy Miller) are more than sufficient to tell this compelling story of loss, pride and transition without a single spoken word. 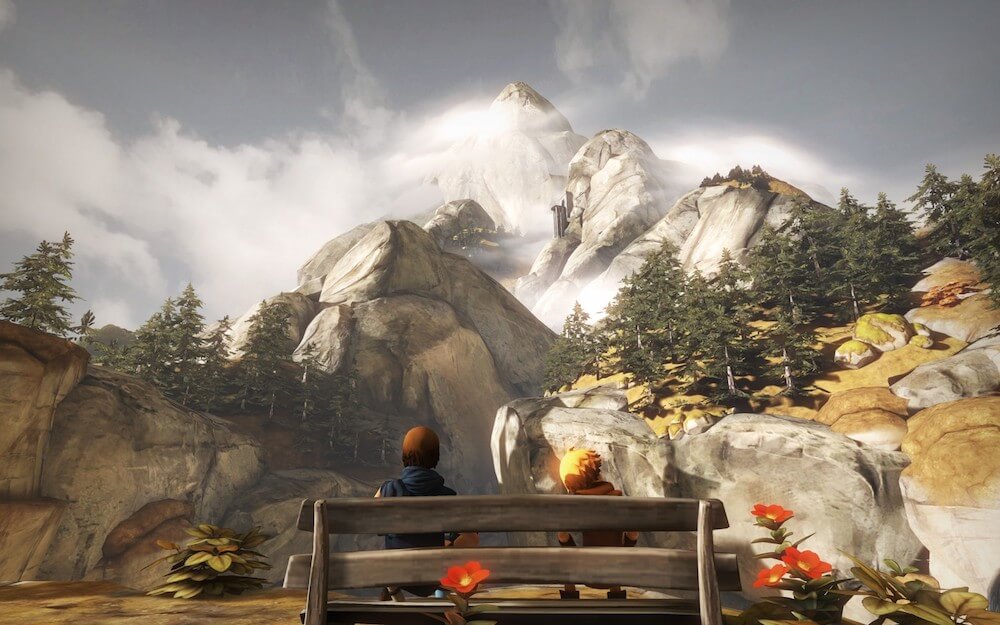 In gaming, we have seen titles such as Gone Home, Virginia, and Brothers: A Tale of Two Sons embrace the sound of silence that The Artist so perfectly captures. These games are but a small sample of those who utilise a silent protagonist in the role of interactive storytelling. In Brothers: A Tale of Two Sons director Josef Fares (A Way Out) introduces the player to our two protagonists Naiee and Nyaa as they grieve by their mother’s grave.

The theme mortality is established within the opening seconds of the game as Naiee the younger of the two is tormented by memories of her drowning and his inability to save her, while the elder brother Nyaa informs him that their father has taken ill.

This sets the two brothers off on a journey to gather healing water from the Tree of Life in order to save their father. Our heroes travel through towns, over hills and mountains in search of their hope for salvation. Along the way, they meet a variety of secondary characters.

They reunite a troll couple, stop a man from committing suicide, evade terrifying wolves and rescue a girl from a terrifying sacrificial offering. These events bring the brothers closer together. Strengthening their bond and that of the player’s with them too.

The gameplay requires you make full use of your controller with both analogue sticks and shoulder buttons called into action to control Naiee and Nyaa. The unusual control input soon becomes less obvious as you adapt to the individual movements of our two protagonists through the dual control mechanics. Soon movement becomes one fluid motion, similar to that of a well-choreographed dance. Very quickly you are at one with the world and the brothers as you navigate the terrain and puzzles before you. 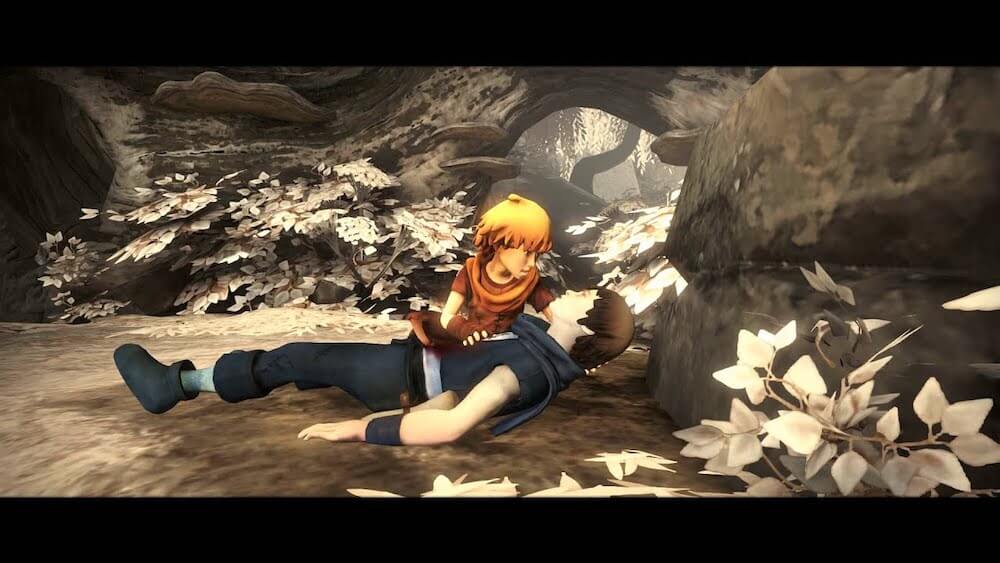 This melodic marriage creates a dynamic score as it tonally shifts from epic to meditative with great ease. The music plays a crucial role in telling the story in Brothers: A Tale of Two Sons. While no words in the traditional sense are spoken, the brothers do emit a series of sounds that evoke emotion, much like the choral sounds of the score. These two linguistic devices work harmoniously to heighten tension and deliver a series of poignant storytelling moments.

As we approach the final act of the game an event takes place which had an impact on me like no other in gaming. As the brothers journey to the Tree of Life, they save a stranger from human sacrifice. The girl they rescue assists the brothers on their journey, and as the trio travel, Naia and the girl begin to grow close to one another. Upon entering a cave the girl reveals her true form as a hideous spider and attempts to eat Naia.

The brother overpowers the monster, removing her leg to kill her, despite this, she lands a damaging blow to Naia. After they escape, Naia rests and Naiee climbs to the top of the Tree of Life. When he returns he finds that his elder brother has died from his injury. Despite his best efforts, he is unable to revive him. Naiee proceeds to prepare the grave for his brother and as the cutscene ends he stands still waiting for the player’s input.

It was this moment, this exact moment of motionless, the game stopped being a game. I placed my controller down and cradled my head in my hands as I was overcome with emotion as part of my role, part of me was no more. I, like Naiee, had lost someone, that other part that had made me whole up until now was gone. I was watched Naiee with his head down much like me and felt his pain. I realised that the game, like life, would have to go on. I reluctantly picked up the controller and helped Naiee drag his elder brother’s lifeless body to his final resting spot.

The final act of courage for Naiee came when having to swim back to the village. With the help of his mother’s memory, Naia’s spiritual guidance, and I, the player, motioning him forward with the controller, we returned to his father’s bedside and administered the Tree of Life’s healing water. Our story ends with father and son grieving at the graves of mother and brother. 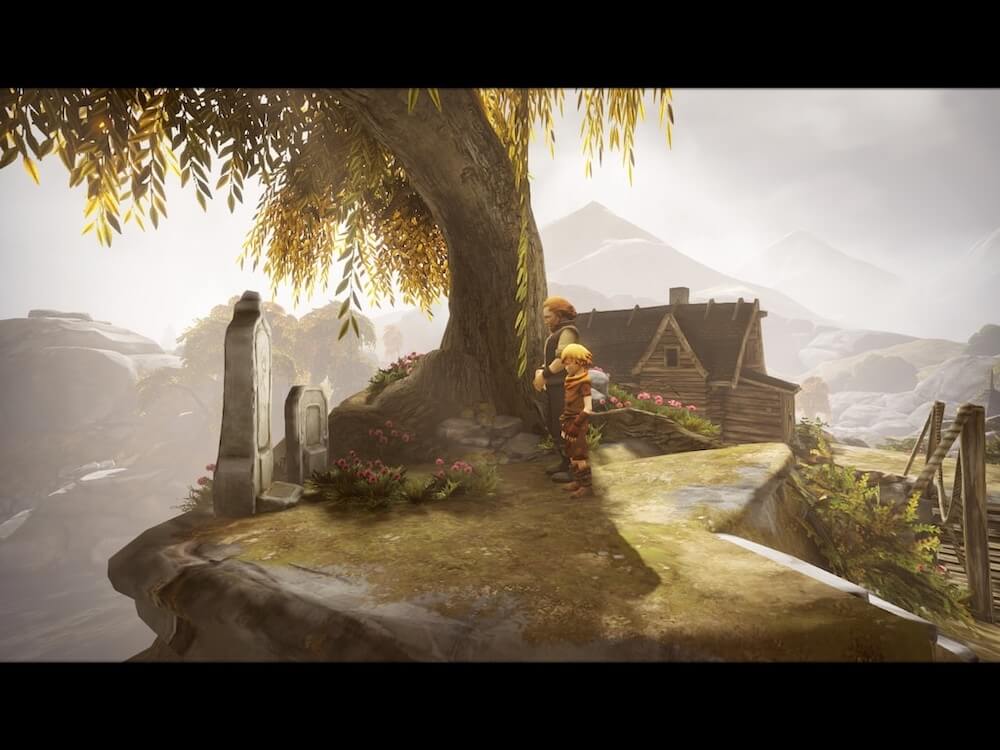 Playing Brothers was a cathartic experience. Through simple gesture alone, I was taken on an emotional journey far surpassing the geographical journey I embarked on with Naia and Naiee.  In no other game have I experienced a truer breaking of the fourth wall between player and protagonist.

The game’s dual control mechanics made me feel at one with the characters on screen, they were not simply the work of programming, but were an extension of me. The subsequent passing of Naia and having to help Naiee bury him was a tangible experience.

Brothers: A Tale of Two Sons left me ruminating on the preciousness of life and the inevitability of dealing with mortality. In an industry of maturing storytelling and graphical fidelity, the sound of silence never seemed to offer so much.