Home » The Beginner’s Guide and the falsification of memory

I heard a piece on NPR once on a condition called Highly Superior Autobiographical Memory (or “HSAM”).

It’s unbelievably rare, something like 50 cases in the entire world, and those afflicted remember…everything. Where they were on any given date, what they ate, what they were feeling, virtually every moment stays with them for the rest of their life. Like most real-life superpowers, the condition is also something of a curse. Relationships grow and fall apart, but the feelings involved never fade from memory; people with HSAM can perfectly remember what it felt like to love someone who left them or to hate someone and have to forgive them.

Their lives are never-ending playbacks of the past, with all the joy and pain that brings.

Most of us, thank God, aren’t saddled with this ability. We recontextualize the emotions of our memories as time moves forward, the sting of break-ups and arguments eventually dulling to a manageable level.

We are, in a way, lying to ourselves.

Painting over the details with a broad brush, we reduce complex relationships to simple mental narratives. With respect to those with HSAM, this aspect of the mind isn’t a flaw; it’s a feature.

Finding a way to move past a traumatic incident is necessary to keep living a happy, productive life. Simultaneously though, failing to learn from those experiences is a great way to become trapped in repeated patterns, reliving the same mistakes with different people over and over again.

Maybe this is why the truth of those painful events sometimes slips past our mental defenses; it often happens to me in the middle of the night, waking me with an unexpectedly clear and agonizing memory of some long-past relationship.

The Stanley Parable, Davey Wreden’s extensively discussed dissection of narrative gaming, is not an experience about memory and emotional pain. His next release however, The Beginner’s Guide, tackles those topics head-on. 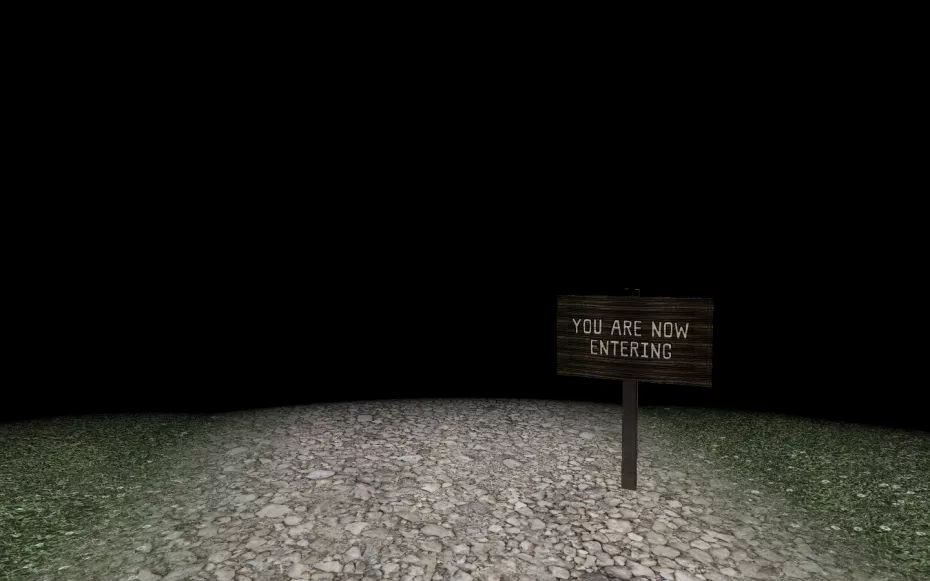 Before we start, two important notes:

One, The Beginner’s Guide was one of the most impactful narrative experiences I’ve had. If you haven’t played through the game, I encourage you to do so before reading.

Two, a crucial element of the game’s story is the rejection of attempting to understand a person by the art they create, as detailed by Ian Danskin in this video. Therefore, it would be a betrayal of one of the game’s central principles to try to extrapolate any information about the real-life Davey Wreden, which is made significantly more challenging by the fact that the narrator of the game purports to be Davey himself. There is a separation between the real, living Davey and the character he plays in this game, and it’s important to not conflate the two. Real-life Davey’s motivations are his own. Davey the Narrator, however, has clearly experienced immense emotional trauma. The game we play exists as a response to this pain.

For the first couple of ‘levels’, The Beginner’s Guide doesn’t appear to have much of a story at all.

It’s introduced as a tour of sorts through a series of games Davey’s friend Coda created. These games are esoteric, abstract. In one, the player is required to sit for an entire hour in a jail cell before progressing.

Another is a simple hallway from point to point, which turns out to be just one in a massive system of inaccessible, and normally hidden, pathways. These tricks and shortcuts to the levels are revealed our narrator, Davey, who often allows the player to bypass the more oblique sections of Coda’s creations.

He tells us he’s doing this to reveal a throughline in the work, a mystery hinted at by the consistent presence of identical lampposts. While he may be making minor adjustments to the playability of the games, Davey says, it’s all in the pursuit of understanding Coda as an artist. 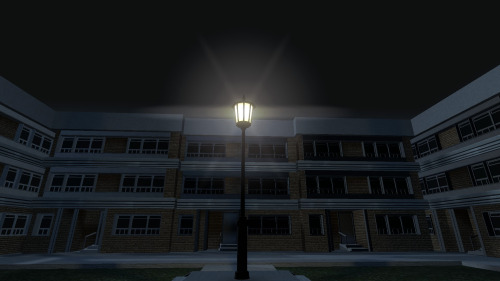 When Coda’s work starts getting tonally darker, Davey tells us that he feared this was indicative of the mental health of his friend. The games represent the isolation Coda was feeling, he tells us, the fact that he was getting stuck in a rut with no way out.

In an attempt at encouragement, Davey secretly sent out Coda’s levels to a variety of players and critics; he hoped that positive encouragement would help Coda snap out of his funk. Maybe then he would start making games that were, by Davey’s definition, fun and interesting again.

Davey says, explaining to us repeatedly why he showed off Coda’s work without his permission, why he felt it was the only option, why this was really the best thing for Coda to experience. His actions, he insists, were entirely based on the needs of his friend.

Coda’s final game is one directed at Davey directly. It’s a cold, hostile tower, a grueling trek through purposely unplayable obstructions. Unlike any of the other levels, it necessitates the kind of meddling that Davey has done with all Coda’s other work. The “reward” for hacking through the tower is a direct confrontation with the narrative Davey has told us all along. 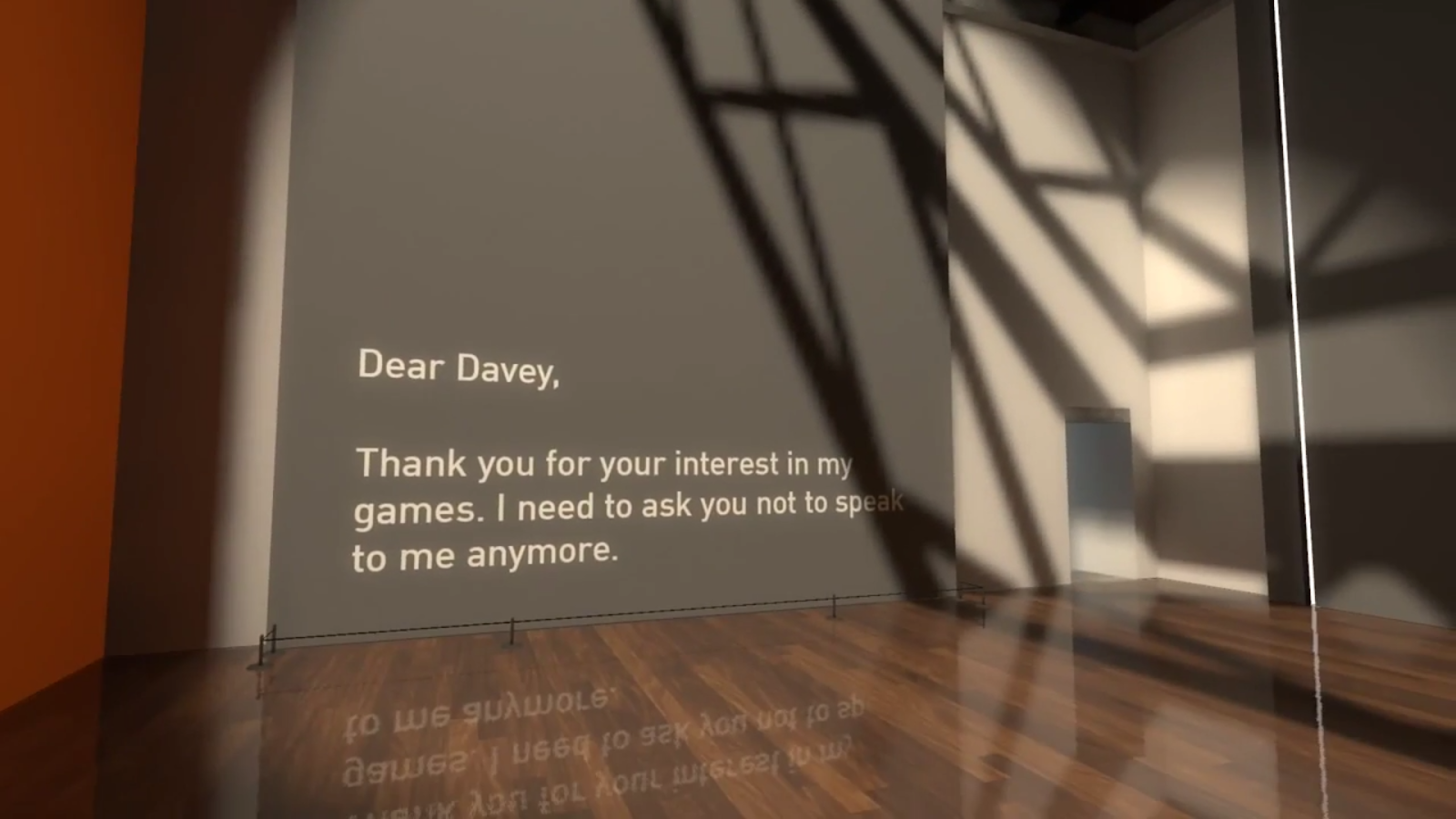 Up until this point, Davey’s voice is the only one we hear throughout the game. As such, I took his description of his relationship with Coda at face value. But in this final level, we see that Davey’s telling of their story is far from objective. In the one time we get to hear Coda’s voice unfiltered, he’s revolted by what Davey has done. One of the walls reads:

When I am around you, I feel physically ill

This is the Coda that Davey tried to block out. Throughout The Beginner’s Guide, Davey’s tour guide act implies that he knows some greater truth about Coda, one that he’ll try and impart unto us. He has no such knowledge. The Beginner’s Guide spends a long time lying to the player about the nature and purpose of these games. Misleading us is a side-effect though; the true conflict is that Davey has been lying to himself.

Would you stop changing my games? Stop adding lampposts to them?

Coda writes, revealing that Davey has been doing far more than simply making the games more convenient. He’s been (literally) gaslighting himself; changing the games in an attempt to change the reality of his relationship with Coda. His lampposts were an attempt to force an understanding where one simply didn’t exist. His tale of Coda’s self-destruction, an idea based his interpretation of Coda’s games, became absolutely necessary to Davey’s conceptualization of self.

With it, he’s a detective, solving the mystery of his friend’s coded cry for help. Without it, he’s just a person who destroyed a man’s safe space through his own selfish need for approval.

Davey’s need to fill this role of artistic interpreter made him actually manipulate the art he was so desperate to understand. He couldn’t let himself be the villain of his own narrative, and so he simply created a fictional one. Those identical lampposts, which he promised would make sense eventually, were an artificial attempt to shed some light on the story he had already told himself. In reality, he’s completely in the dark.

Davey is the villain of this story. But he’s an unbelievably sympathetic one. I’ve had friendships fall apart over the years, in ways not dissimilar to how Davey lost Coda. He reduces Coda to an idea, a sort of surrogate for all his own emotional pain. And once their friendship is over, Davey is unable to move forward without deifying or demonizing Coda. He can’t understand that both of them are just people, and there are some things that simply can’t be changed.

I know that I did an awful thing, and I’m doing it again right now…That’s how badly I need to feel something again. It’s like I’m an addict.
If I apologize, truly and deeply, will you start making games again?

Davey bargains and pleads, but ultimately runs out of fictional avenues to escape down. Coda just doesn’t come back. There’s nothing else to do except what he’s been avoiding this whole time; Davey finally has to confront himself.

If I knew that my life depended on finding something to be driven by other than external validation, what would that even be?

There is no true closure in The Beginner’s Guide. Davey trails off mid-sentence, leaving us to walk through the epilogue of the game in silence. But there’s hope in the uncertainty. In his final moments of narration, Davey doesn’t try to analyze Coda, guide the player, or make any pretensions of understanding.

For the first time, he’s attempting to come to terms with himself. More of Jacob’s writing can be found on his blog, or on his twitter @yacobg42