NB: Some readers may consider details in this review to be at least minor spoilers.

What Remains of Edith Finch is, if nothing else, a bizarre game.

At first, it seemed like a dark, Lemony Snicket-penned parody of Gone Home; a young woman returns to her abandoned family home, and explores each part of the house, learning about the lives of its main inhabitants through the spaces they staked out for themselves.

The manor’s geography is absurd, full of secret passages and covered in extra rooms and precariously balanced towers, all bolted and nailed to the exterior. Likewise, the segregation of each character’s territory is crude and lampshaded – where the Greenbriars each dominated some wing of their overlarge Portland mansion, here character bedrooms are actively sealed off from one another, their doors nailed into the frames. It all seems to lampoon recent mainstays of the environmental adventure genre such as Fullbright’s opus. 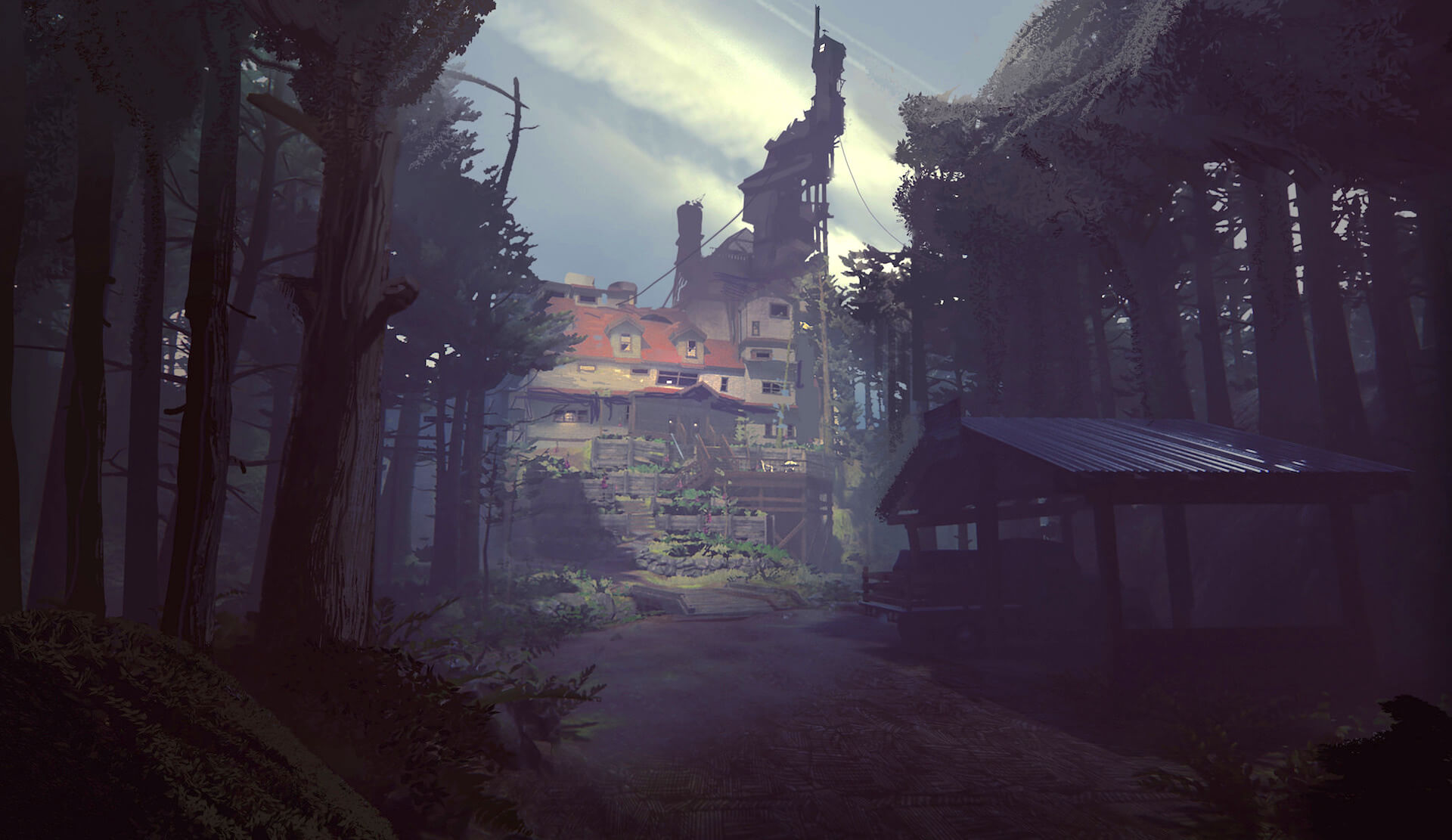 The game’s mis en scene most often leans somewhere between Tim Burton and Wes Anderson, giving the impression of a veneer of domesticity, draped unconvincingly over something darker and more surreal. Each room is crammed with absurd, arch characterisation of its former inhabitants, each one like a character from some dark children’s storybook.

As you make your way through the house, however, the characters come alive in vivid ways quite different from the incidental, literary manner of Gone Home and its ilk. It’s a fascinating and richly illustrative space to traverse.

Similarly, the game’s main focus – the bizarre, coyly ironic ways in which different members of the Finch family, often children, have died – seemed to me to even poke fun at That Dragon, Cancer.

As you explore the house, the game breaks away into separate vignettes, spread across time, space and aesthetic, each of which explains how a member of the Finch family met their end. It’s all part of a Finch family curse – the curse apparently being that every Finch dies like one of the Gashlycrumb Tinies.

This is where it separates itself out from minimalist, realistic games like Gone Home and its ilk. Just about all of these stories are rooted in magical realism and many are darkly comic, revealing entirely new mechanics to find space for play in each character’s last moments.

A former Hollywood ‘scream queen’ finds herself in an old EC-style horror comic, as masked killers invade her house. Her brother hides in a bunker for decades, before finally re-emerging. A hunter and his daughter go on a morbid hunting/photography trip, with the player lining up each ‘shot’. An artist’s last moments are depicted via a flip-book drawn by the artist themselves.

All their fates are abrupt, dreamlike and evocative, using each scene’s systems and unique aesthetics to dive into the characters themselves. Death comes quickly, it comes inevitably and, as far as this game is concerned, it always seems to come ironically.

The Giant Sparrow team does an incredible job of dramatizing their characterisation of the Finches through play, and the ease with which they pick up and discard ideas, as soon as their moment is past, demonstrates their incredible confidence in their own inventiveness.

Within the first sequence, What Remains of Edith Finch has you playing as a shark, falling out of the sky and down the side of a mountain toward the ocean, or as a ravenous monster devouring sailors before finding your way underneath a little girl’s bed, but by the next level the game has moved on completely.

The same Spartan control scheme has you opening tin cans, bludgeoning burglars and making your way through the game’s now-famous signature scene. Here, you simultaneously cut the heads off fish with one hand, and navigate an ever-increasingly complex fantasy world with the other. The daydream slowly blocks out more and more of reality with each splat of the fishes’ heads, leading to a disgusting, heartbreaking and powerful conclusion that justifies the game all by itself.

What’s striking is how genuinely funny I found the game’s cutaway scenes. The story’s events are largely depicted with a dark, wry wit. Even its darkest moments frequently tip into ironic absurdism and meta-textual kitsch, in a way that had me laughing more often than not. As I mentioned above, it’s very reminiscent of A Series of Unfortunate Events – self-aware in its gothic melodrama, constantly winking at the player.

Having talked to some friends, I’m apparently the only one who found it as funny as I did; maybe this says more about me than about the game, but if you have a similarly dark sense of humour you may well enjoy that extra dimension.

However, these charming, darkly funny episodes are placed within a framing device that never quite fits or builds effectively. Edith Finch’s story – revisiting her family home, discovering and rediscovering her family history – finds itself pushing for sombreness that never gets a chance to really build, existing in the gaps between its witty, bizarre vignettes. 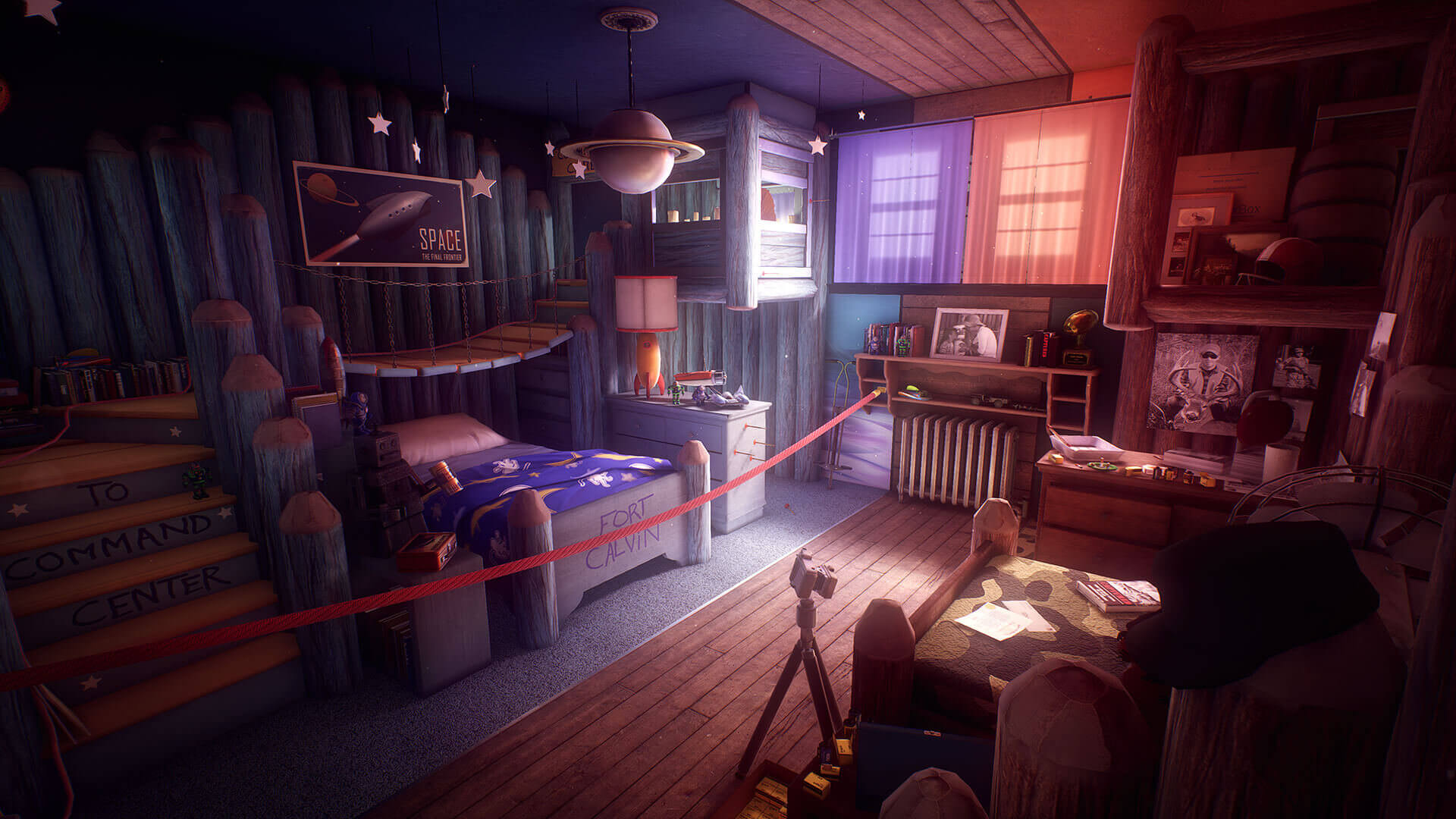 This disconnect means that I found the ending to arrive without emotive punch, unable to gather momentum as it darts between disparate tones and tenors. As the ‘Big Emotional Conclusion Event’ arrives and the music swells, the whole thing felt unearned, bordering on manipulative. Quite a let-down of an ending.

This structure also lead to what I feel is a thematically incoherent conclusion. The smaller sketches ruminate on death and family in myriad different ways, but I didn’t find the attempts to wrangle them into a consistent thematic statement for the finale to ultimately pay off.

The emotional payoffs for the individual characters hit hard, but the game builds to a cliché about mindfulness, imagination and living in the moment, and even that is inconsistent.

Ironically, the game’s most resonant theme is the tragedy of unrealised potential, shown through both the many young deaths the game depicts, and ultimately through its own inability to find an ending point which lives up to the promise of its different elements.

So now I have to talk this review back from the edge, because this game is still absolutely worth your time. It’s a testament to the quality of the game’s constituent parts that I believe they are still worth the price of admission, even though the value of the whole may be less than their sum. Almost all of the stories in this game are inventively and captivatingly realised, and the whole three-hour experience has a richness which many games with a hundred times the length never manage.

What Remains of Edith Finch presents you with a fascinating space, filled with wonderfully told stories and ingenious forms of play. It illustrates a huge range of ideas and takes brave risks with form, theme and tone. It’s also structured in a way that works against the charm and frequent brilliance of its episodes, which left me disappointed as the credits rolled.

In spite of this, it manages an inventiveness, wit and intelligence beyond what most games would ever come close to achieving. Tantalisingly close to a truly great experience.