In the somewhat unlikely event that I experience complete, debilitating amnesia and wake up separated from my friends and family, there are few things I’ll know for certain about my past life. One of those things: my infatuation with the architecture of Fumito Ueda. My only tattoo, stretching across my ribs like it does across the forbidden lands, is the enormous bridge from his masterpiece Shadow of the Colossus.

The bridge is a perfect microcosm of the world of the game as a whole; beautiful but lonely, enigmatic and foreboding. It seems like an unnatural part of the environment, and yet somehow an indelible part of it.

Despite my love for the structures of Shadow of the Colossus though, the crowded settings of his other works – ICO and The Last Guardian – are where his Ueda’s design sensibilities truly shine. An auteur of ruin and decay, Fumito Ueda has used the unique aspects of videogames to create some of the most strangely believable worlds in recent fiction.

Ueda appears dismissive of his own architectural themes. In the recently released book on Guardian, he was asked why he sticks to the ruined-beauty style he’s famous for. In response, he states:

“I was thinking about the limitations of level design… for example, if a player wants to get to a high place, they first need to get through this narrow place, or they need a bridge. Or places where the player would want a staircase and instead it’s destroyed. I neither love those things nor hate them- it’s not that I have as strong a desire to express a ruined world as everyone thinks I do”

There are a couple ways this quote can be read. On the surface, it appears that Ueda isn’t particularly attached to the themes of his world; he destroys bridges and stairs simply to give the player an obstacle to overcome.

What he’s implying though is that the worlds exist, fully formed, before he builds a ‘game’ into them.

Unlike reality, there’s no need for a game to have a pre-existing staircase before destroying it. He could design a number of challenges and build the world to fit them. He could, in fact, design levels with no staircases at all. Instead, he makes games in decayed environments because it’s seemingly inconceivable for him to create structures without their own internal logic.

Level design in games sometimes feels at odds with the majestic art of the world surrounding it. Having recently played the Ringed City expansion to Dark Souls III, I was disappointed to learn that I’d only be able to walk through a handful of alleys in the grandiose city; most of the environment is a fancy, but empty, backdrop.

It’s by defying this trend that Ueda’s settings feel so distinct. Despite the fantastical nature of ICO and Guardian, their worlds feel more grounded than any other I’ve experienced. One reason for that is the absolutely exhaustive exploration of these environments.

This exhaustive map of ICO (by the excellent Nomad Colossus) shows that there is almost literally no room in the enormous castle the characters don’t encounter.

Similarly, the spruced-up view of the entire game map of The Last Guardian (below) shows, again, nary a place the player hasn’t been. Gazing out the windows in BioShock is lovely, but the sprawling city of Rapture never feels like much more than a skybox.

In contrast, I left both ICO and Guardian knowing that my blood, sweat, tears, and/or feathers littered every inch of their locales.

As he’s mentioned in a couple interviews, Ueda has never visited a castle. Nor, reportedly, does he want to. Real-life knowledge, he says, would get in the way of his imagination.

Ueda instead cites French architect-turned-painter Gérard Trignac as a major inspiration. Trignac’s arches, waterways, and towering façades are so reminiscent of Team ICO’s games they could be mistaken for concept art.

Another source of design is Giorgio de Chirico, an Italian artist at the forefront of the surrealist movement. Fixated on sparse environments, unusual buildings, and yellow lighting, Chirico’s paintings have a disquieting childishness that would later define Ueda’s characters.

The hand-drawn cover for the European and Japanese releases of ICO (not the god-awful one for the United States) practically screams Chirico.

And yet, Ueda’s work isn’t just a static piece on a wall. His worlds are alive, created in accordance with the laws of the game’s own universe, rich with untold backstory and ravaged by time. Guardian’s crumbling structures are intentionally anachronistic, a rusted metal gate inside a tower of cold polished marble.

It’s like they’ve been built and rebuilt on top of each other in a sort of rushed architectural colonization. ICO’s castle could have once been warm and hospitable, but generations of isolation and regression has turned it into an unforgiving fortress, retrofitted only to keep its subjects in and outsiders out. None of this is said, but all of it is felt.

Anyone could feel the difference between walking the streets of Edinburgh and those of Chicago; places carry the weight of their stories. Somehow, Ueda has imbued a wordless history within his beautiful, impossible, inhospitable worlds.

Personally, the worlds of ICO and Guardian remind me of Hayao Miyazaki’s flying city, Laputa, from his 1986 film Laputa: Castle in the Sky. Enormous but abandoned, futuristic but overgrown, shockingly beautiful and dismayingly temporary. When I first saw Castle in the Sky I was seized by a profound longing for a place that never existed outside the creator’s mind.

Knowing that I’d never get to wander the overgrown streets or gaze up at the vine-covered skylights caused an almost physical sense of heartache. I remember feeling similarly as a kid, when I first learned about the Colossus of Rhodes and the Lighthouse of Alexandria, and then of their subsequent destruction. Fictional or not, the commonalities between these structures that captured my imagination are clear; driven by artistic ambition and/or hubris, humans created buildings that eventually proved to be as impossible as they appeared. 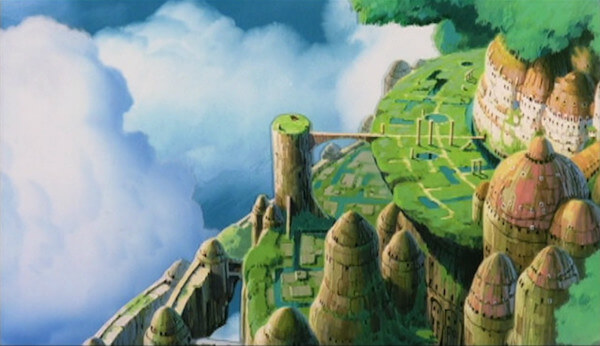 Fumito Ueda’s games have a sort of reverence for nature. In ICO, all that’s visible of the outside world is trees, and the conclusion takes place on a beach- the only naturally formed location in the entire game.

Shadow of the Colossus paints the player as the villain for destroying remnants of the environment, and the boy in The Last Guardian simply wants to get back to his quiet forest village.

Artificial structures get no such deference. Like Castle in the Sky or the skyscrapers of Alexandria, each one of Ueda’s creations is ultimately destroyed; the castle crumbles into the sea, the marble tower collapses in on itself, and even my beloved bridge shatters under the feet of those who trespass upon it. Everything created by man is finite in Ueda’s works, and all of that created history is eventually meaningless in the face of the unforgiving environment.

For a few brief hours though, these three games gave me something I could never have from a painting, book, or film. I was allowed to wander. To explore a world that never was, but felt like it could have been. 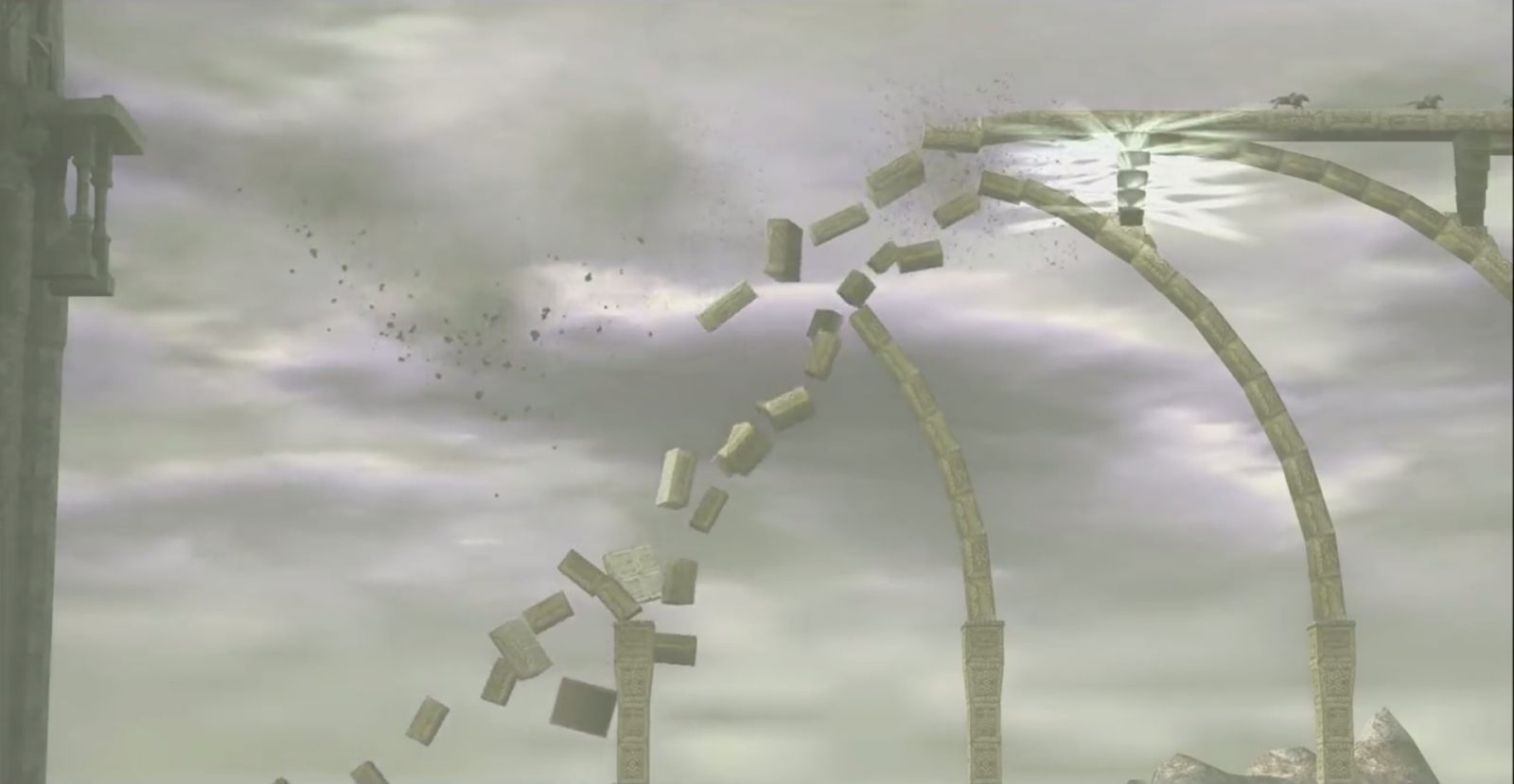 More of Jacob Geller’s work can be found on his blog at thirteenthcolossus.wordpress.com, or on his twitter @yacobg42

This Eurogamer article was a great help in writing this piece.