It’s strange to think that, not so long ago, horror games were thought to be a thing of the past.

I grew up in the PS2 era, so I remember the hushed tones in which people would talk about Project Zero (aka Fatal Frame) and prime-era Silent Hill, but I also remember the moment of transition – Silent Hill’s fall from grace and the cacophonous praise prompted by Resident Evil 4’s transition to a schlockier action tone.

For a number of years, it was only a few critics’ banner-waving that kept people aware of horror games at all. For a sense of perspective, I sincerely believe that, without Ben ‘Yahtzee’ Croshaw’s advocacy, Silent Hill 2 would have been largely forgotten in the fallow years of 2005 through to 2012. Or at least it certainly wouldn’t have its rightful position as a landmark of the medium now.

But then came Penumbra, and Amnesia and Lone Survivor as well as a glut of YouTube fodder games like Outlast and Slender, eventually culminating in Hideo Kojima’s lost, loved masterpiece, P.T. (a Playable Teaser for the mooted but ill-fated Silent Hills project).

Horror has resurfaced in the videogame space over the last few years to an astonishing degree, revived by independent developers and hobbyists determined to prove the genre’s relevance in the face of a gloomy corporate forecast.

Simultaneously, another genre has done much the same thing. People forget this, but the environmental adventure game (sometimes, usually pejoratively, referred to as a ‘walking simulator’) has always been horror-adjacent.

Genre codifier Gone Home was created by Bioshock alumni after all, and – spoiler alert – set itself up to be a horror game in the Amnesia mold, even if ultimately it subverts this expectation – spoiler over but seriously, go and play Gone Home.

Before that, Dear Esther was praised upon its release for being eerie and unnerving, and horror megahits like Slender and PT both devote plenty of time to minimal mechanics and an emphasis on the trudge.

But even this boundary is ripe with potential for crossover, and to me this intersection is strikingly apparent in Kitty Horrorshow’s Anatomy.

Anatomy has the surreal, oppressive terror of an honest-to-god nightmare. Set in a pitch dark house with no lights and a macabre taste in wall hangings, the player must look for audio tapes throughout the various rooms. Each time, they must bring them back to an eerily glowing tape player, which plays more and more of a monologue about the ways in which a house is analogous to a body.

This is no mean feat, considering both the tiny amount of light that illuminates most of the game and the terror of tentative steps into a new room of the house, the horrors of which have just been obliquely discussed in the tape you were just listening to.

The viewpoint flickers with the VHS artefacts of an old video camera, sputtering and distorting as the player attempts to find their way around the house, at once providing both an uncanny distancing effect and a strange period authenticity. 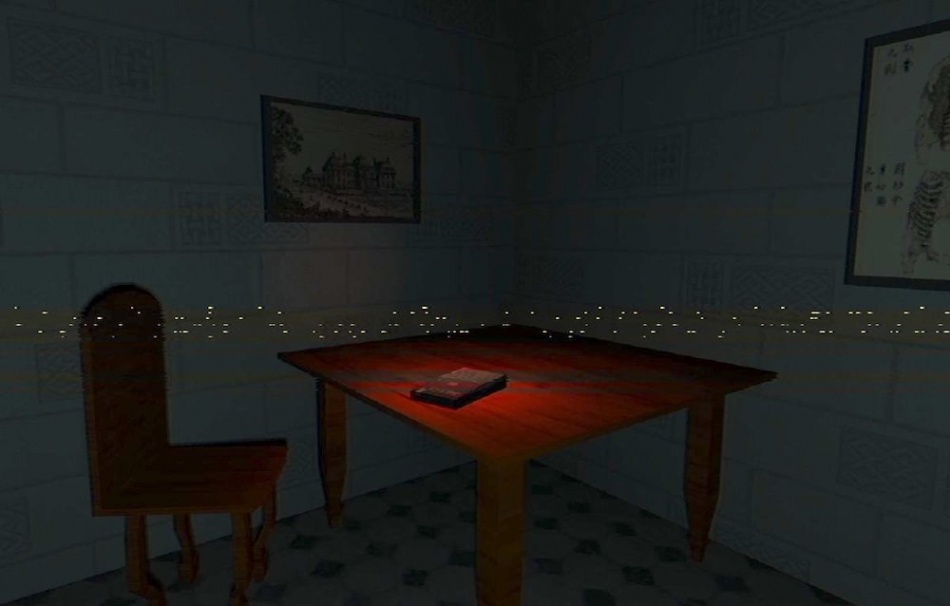 The almost-total darkness of this setting evokes much of the domestic horror of Mark Z. Danielewski’s modern horror classic House of Leaves, with its tales of the house as a changing, growing, living and ultimately unknowable organism.

Mechanically and aesthetically, as with Danielewski’s work, Anatomy centres itself around subversion of the familiar. It does this first through its surreal dimensions and near-impenetrable darkness, then through its unnerving features – and ultimately through the ways in which it demands to be replayed.

Each playthrough becomes more intensely unsettling and distressing than the previous, peeling away the rules of the last, degrading like a copy of a copy of an old video tape.

Ultimately, the game maintains and builds horror by keeping the player constantly on the back foot, constantly aware that the domestic space they inhabit is never familiar, never stable. At every step, it subverts comfortable expectation, confronting the player with new layers of unknowability, slowly undoing even the artificial protection of realism with glitches and impossible geometry.

It’s a horror that gnaws, a constant low-level understanding that nothing you’re doing is on your terms. The game’s structure drives you onward, but every time you open a door, every time you press play on a tape machine, you’re leaving yourself vulnerable to whatever the game has become this time around. Anatomy’s house possesses an extraordinary air of malevolence expressed as a masterstroke of art and level design and smart, understated scripting.

The most striking gift Kitty Horrorshow brings to this project is a tightly refined aesthetic sensibility. She has an astonishingly precise understanding of what to place where, and how to constantly heighten the state of fear the game places you in. She draws on a knot of tightly complimentary affectations to drive up the intensity of fear incrementally enough that the escalation never becomes corny or crass. In this respect, Anatomy is an unnerving masterwork.

I want to spoil as little as possible so I’m going to draw this to a close, but I have to leave off by saying that I’ve never been as honestly terrified by a game as I have been playing through Anatomy. It made me constantly tense, driving out every illusion of safety to a degree that I’ve never experienced before.

Every time I was faced with a new thing I had to do to proceed, I found myself hesitating, sometimes for minutes at a time. The game’s ominous, meaningful shifts were repeatedly met with an increasingly high-pitched whimper of, “Oh, Hell no.”

Sometimes I simply closed the game and continued later – it took five sittings for me to get all the way through Anatomy, and it’s a short game. More than a few other critics hadn’t made it far into even the second loop.

Anatomy is a treat for any horror-hounds out there, but it’s also a tremendous experience for anyone interested in the cutting edge of ways in which games can evoke visceral, emotive responses.

Whether you love horror, or if you just have an interest in how a singular, refined artistic vision of a game’s design can become a stunningly evocative experience, I think it’s worth your time.